‘Now is not the time,’ UK’s May tells Scotland on independence vote 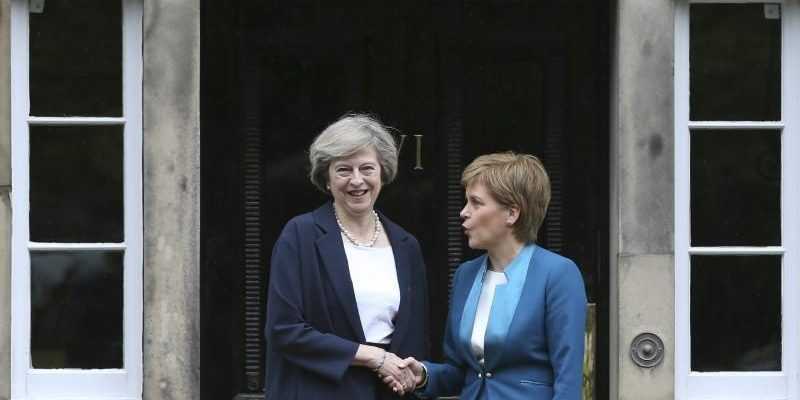 LONDON/EDINBURGH British Prime Minister Theresa May told the Scottish government on Thursday “now is not the time” for a second independence referendum, saying it would be unfair to ask people to vote without knowing the result of Brexit talks.

Her comments raised tensions with Scotland, where nationalists have called for a new referendum and accuse May of all but ignoring their demands in her preparations for divorce talks with the European Union.

Scotland voted to remain in the EU last June and Scottish First Minister Nicola Sturgeon said after May spoke that blocking an independence referendum would be undemocratic.

The remarks upped the ante in a war of words over Scottish independence as Britain prepares for intense EU exit talks.

“Right now we should be working together, not pulling apart,” May told British television.

May did not say outright whether she would block a Scottish referendum but Sturgeon was quick to accuse the prime minister of doing just that.

She said on Twitter: “The Scottish government is not proposing #scotref now… but when the terms of Brexit clear and before it is too late to choose an alternative path.”

Sturgeon says Scotland should have the chance to stay in the EU’s lucrative single market and keep an open-door immigration policy after voting to remain, and has criticized May for failing to consult the Scottish government on her strategy.

The Scottish Greens, another pro-independence party, said May risked boosting support for independence if she wanted to veto a decision expected to be made by Scotland’s devolved parliament next week.

Sturgeon is by no means guaranteed to win a referendum just 2-1/2 years after Scots voted to remain in the union. But she has managed to put pressure on May just days before Britain is expected to trigger Article 50 of the EU’s Lisbon Treaty and start the formal divorce procedure.

May is a unionist and will fight hard to keep Britain together but her government will be stretched in trying to negotiate a “good deal” with the EU and keeping vocal eurosceptics in her ruling Conservatives onboard.

Britain’s vote to leave the bloc last June deepened geographical and social divisions in the country, with Scotland and Northern Ireland voting to stay in the bloc while England and Wales backed an exit.

May says her government is committed to engaging with the whole of Britain over Brexit to negotiate a good deal for everyone.

“To look at this issue at this time would be unfair because people wouldn’t have the necessary information to make such a crucial decision,” May said.