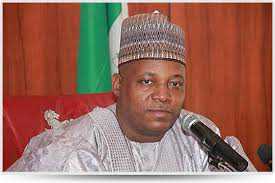 The Northern Region of the Christian Association of Nigeria (CAN) has alleged a conspiracy between Borno State Governor, Alhaji Kashim Shettima, and the authorities of Government Girls Secondary School Chibok, from where Boko Haram terrorists abducted over 200 mostly Christian girls on April 14.

Northern CAN in a statement issued today in Kaduna and signed by its Secretary-General, Prof. Daniel Babayi, and Public Relations Officer, Sunday Oibe, also raised six posers for Governor Shettima.

and should produce them without delay. It also alleged that parents of the affected children are being intimidated by Shettima’s administration, which explains why they are reluctant to volunteer information on their missing children. Northern CAN said in the statement:

Since the abduction of some female students in Chibok Local Government Area of Borno State, Northern CAN has decided to be silent for some reasons. We have decided that we will make statements when we have all the facts of the matter. It may interest Nigerians to know that we have fundamental questions which demand one million answers:

1. Since the abduction of these girls over two weeks ago, has Borno State Governor, Alhaji Kashim Shettima, constituted any panel of investigation with a view to making its report public?

2. How did the 353 female students disappear from the school into the thin air?

3. Why did the Borno State Commissioner for Education, Principal, Vice Principal and Chief Security Officer, all Muslims, ignore the valid advice of WAEC on the security implication of writing exams in the school and the need to have a centre where the children’s life will be secured?

4. How did Boko Haram carry over 200 students and their food stolen by these criminals from the school? Was it carried with trailer?

5. Why is it that since this issue came up, no single photograph of the abducted children was made public by the school authorities? After all, they were preparing for exams and may have submitted their photographs.

6. Where were the daughters of the Principal, Vice Principal and Chief Security Officer when the abduction took place?

So these are the questions; we have done our investigations, we are begging the international community, we are begging the Federal Government of Nigeria and the press to ask these legitimate questions from the Governor, Commissioner for Education, Principal and CSO of the school because Chibok is a predominantly Christian area. What we are after is the safety and future of these children, whether they are Christians or Muslims or our enemies doesn’t matter. They are Nigerians, first and foremost.

Our positions are as follows:

1. The Governor and government of Borno State should and must as a matter of urgency stop playing politics with the lives of the children of other people. They should produce those children without delay because they know their whereabouts.

2. We demand an explanation from the Governor, Commissioner for Education, Principal and CSO of the school on what they did and what they did not do that led to the ferrying away of these innocent children who went to sit for an examination for the betterment of their tomorrow.

4. We also demand that the Federal Government and the international community should help us beg the Governor of Borno State to do everything within his powers to produce these children.

The abduction of these girls seems a resurrection of what the Christian communities in Northern Nigeria have been suffering for centuries in the hands of the Emirs and Imams regarding forceful conversion and abduction of Christian girls. Borno State government should be reminded that the fundamental human rights of these people should be respected and protected.

The Governor should provide immediate explanation because we know that some people want to sacrifice these children on the altar of politics. There is a limit to which Christians would tolerate all these abnormalities. We suspect a conspiracy among all of these characters including the Governor, Commissioner for Education, Principal and CSO since none of the daughters of the teachers and Principal were abducted; there is more to it and this is the position of Northern CAN.