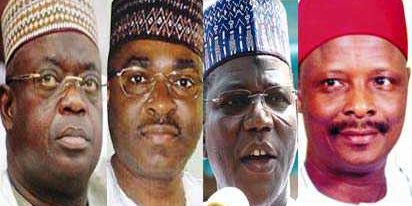 A delegation of the Northern States of Nigeria Governors’ Forum, NSNGF, met Monday night with Governor Murtala Nyako and members of the Adamawa State House in a bid to settle the rift between the Executive and Legislative arms of government in the state.

The delegation of the governors, Rabiu Musa Kwankwaso of Kano State and his Sokoto State counterpart, Aliyu Magartada Wamakko met with Nyako and the legislators behind closed doors at the Government House, Yola.
Governor Wamakko could not attend the meeting as his chartered aircraft had to return to Abuja due to bad weather.

Sources said the governors were unhappy with the frosty relations between the two arms of government and pleaded with the legislators to retrain from any move that could further widen the gap between them and the governor.

According to the sources, the NGF was particularly bitter with the legislators for starting a quarrel with the governor at a time the state was grappling with the activities of insurgents.

The sources added that the governors advised the legislators to take into cognizance the prevailing economic situation in the state occasioned by the prolonged state of emergency and close ranks with Nyako to reduce the sufferings of the people.

However, Governor Kwankwaso told reporters after the meeting that he was in Yola to hold consultation with Nyako on issues that were beneficial to the two states.

“I am in Yola to see my elder brother. We have met and discussed a lot of issues that are of common interest to us. I do not need to be sent by anybody before I visit Yola to see Governor Nyako,” Kwankwaso said.
Members of the Adamawa State House of Assembly led by the Speaker, Umaru Fintiri, declined to speak to journalists.

Fintiri, in an attempt to avoid the anxious journalists, who barricaded the entrance to the venue of the meeting, sneaked out through the back door.