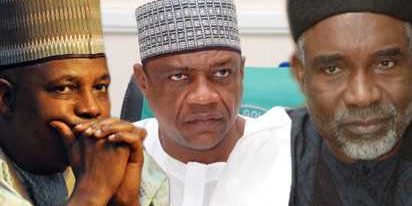 The member representation Bauchi federal Constituency, Hon. Aliyu Garbi has voiced out his anger over the abduction of the missing Chibok schoolgirls and asked Nigerians to hold the northern governors responsible for the insecurity in the region.

Garbi  stated this while briefing the campaigners for the release of the abducted girls at Unity Fountain yesterday on Ecowas resolution on the matter.

The law maker, who was furious about the current situation of security in the North Eastern part of the country, blamed the insecurity on what he termed the complacency and wickedness of the Governors from the Northern region.

He warned against pushing the blame on the federal government, insisting that the Governors from the region, as chief security officers of the states, and the local government authorities and traditional rulers should take more of the blames, rather than redirecting the blame to the centre.

‘‘The complacency, wickedness and evil characters of Northern Governors are what brought us here. They are ineffective, if we must have change, it is not at the centre but from the state level. We can keep blaming the centre because we are also being distracted and misdirected by certain people.  Change must come from state level, if we want to fight Boko Haram.

‘‘Our governors must be held accountable as chief security officers of our states. When it is election time, they know how to harass those of us in the opposition, they know how to get people to rig elections for them, but when it comes to security, they know how to blame President Goodluck Jonathan. He is not the only person that is culpable but all of us are responsible and accountable.’’

He regretted that similar incidence of abduction of girls’ abduction and slaughtering of boys had eelier taken place in the same part of the country without any tangible effort made to remedy the situation but assured that the federal government was doing everything possible to bring the crisis to an end in line with the international best practices.

‘‘Nobody is talking about the boys that were slaughtered, it was swept under the carpet, this is not the first set of girls Boko Haram took, they are substantially more and there were others killed just like that.

‘‘ I assure you that government is doing the best it can and government is in the process of recalibrating itself, in line with the international best practices, so that this crisis is brought to end.  Federal government is trying to get these girls back, it is also trying to see that this kind of circumstances is never repeated, because nothing will be  too much to be done to bring this girls back,’’ he stated.

Hon. Garbi further charged the campaigners to start pushing for a biometric registration of every student in Northern Nigeria, so that if a child gets missing, it will be easy to trace him.

‘‘That has to be done and it has to be done immediately,  if you rely on government,  nothing is going to be done, I think it looks distracted at the moment. I personally, do not feel that there is any price that is too high to be paid for the safety of these girls. The failure is not only at the top, it started from the grassroots, as a representative of my people, if I don’t know the feeling of my people,  how do I expect the president to know the plight of my people,’’ he posited.

He however informed the gathering that the Economic Community of West Africa, Ecowas at the end of its meeting yesterday rose in condemnation of the dastardly act and decided to set up ad- hock committees to find ways of freeing the abducted girls.

‘‘Ecowas is no longer complacent; we are demanding that a committee of heads of states and government be convened to resolve this issue. We actually wanted an ad-hoc committee, so that we can draw up the membership from within our own ranks.  We cannot allow somebody from EU or President Biya of Cameroon alone to take charge of matter that is regional,’’ he said.

Ecowas parliament has not been proactive as expected since this incidence began, while AU is also silence.

Meanwhile, one of the leaders of the campaign, Dr. Oby Ezekwesili reiterated the commitment of the group in meeting and putting pressure on government until the missing girls are released.

‘‘We will continue to come out here to show the girls that Abuja family is standing with them, having resolved that we are not going to stop until our girls are bought back. Everything we do by coming here every day is a walk of hope that one day these girls will be freed. We are simply going to keep our eyes on the ball until we see them return to their waiting arms of their parents,’’ she said.

She also told the gathering that plans had been perfected to for a match on Aso Rock, even as they wait for Presidential response to the letter written in that regards.

On the position of the law maker, Ezekwesili said: “the testimony was an affirmation that the citizens gathering has nothing to do with politicking that goes on an importance issue of the safety of our daughters. This group does not care what umbrella you find yourself under.’’

There was indication also yesterday that the ANC Women league from South Africa is to sent its delegation to Nigeria in solidarity to the missing Chibok girls.

There was also information that there will be a protest match by 9 am tomorrow in Ghana in solidarity for the release of the girls.

The campaigners were on the 20th day of the Sit Out campaign and had been consistent since day one.

Their resolve is that until the kidnapped girls are back, they would not stop coming out in solidarity to the girls and their families.