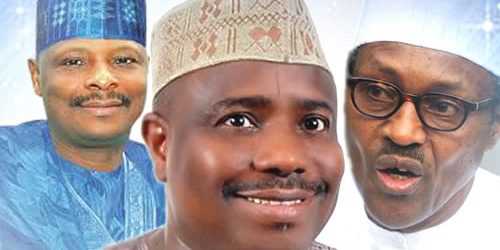 AS the PeoplesDemocratic Party (PDP) meets next week to put its house in order, opposition All Progressives Congress (APC) is deepening its agenda to wrest power from the ruling party.

Investigation by the Saturday Tribune revealed that the opposition is focusing on areas likely to weaken it in the 2015 presidential poll, such as the fight over its presidential ticket and PDP’s presence in some parts of the North.

Findings showed that the leadership of the opposition party, in conjunction with opinion and political leaders in the north, has

narrowed APC’s presidential choices to three; namely Governor Rabiu Musa Kwankwaso of Kano State; Speaker of the House of Representatives, Aminu Tambuwal, and General Muhammadu Buhari. While the party has not even elected its leadership, Saturday Tribune gathered that the three men are being encouraged to dialogue by the north as a way of easing tension at future presidential primaries.

Two of the identified hopefuls were said to have met in a northern state last Wednesday, at a meeting facilitated by some senior citizens in the north, during which they agreed on some critical issues including putting northern and party interest above personal ambitions .

Already, some influential members of the opposition party have started identifying with some of the presidential hopefuls. The former Minister of Aviation, Chief Femi Fani Kayode, recently visited Kano where he drummed support for Kwankwaso’s candidacy. The governor himself was said to have told some elders in the state capital about his imminent endorsement as APC’s presidential candidate.

However, the caucus of a leader of the party and former governor of Lagos State, Bola Tinubu, is said to be rooting for Tambuwal, whom the defunct Action Congress of Nigeria (CAN) helped install as Speaker after the 2011 elections.

An APC source told the Saturday Tribune that the shortlisting of aspirants for the number one position is seen as a major step for the APC to shame its detractors who are already predicting its disintegration ahead of its primary election which may come up later this year.

Part of the deal reportedly reached was to coordinate an Arewa-wide movement to pressure elected PDP officials to defect to the APC. That agenda, which is already being implemented, was said to be responsible for the recent defection of PDP lawmakers in Zamfara and Kaduna states to the APC.

Similar pressure is reportedly being put on elected officials in Katsina, Jigawa and Niger states. Even while governors Sule Lamido (Jigawa) and Aliyu Babangida (Niger) have refused to quit the PDP, Saturday Tribune gathered that their loyalists in the respective state Houses of Assembly are under pressure from the Arewa lobby group.

It was learnt that the opposition is pushing to reduce PDP to a regional party while the APC will take its place as the national party.

” You remember how the PDP emerged from the defunct All Peoples Party (APP) to become a pan –Nigeria party. The same forces that turned APP to a regional party overnight in 1998 are coordinating a reenactment of that feat with the PDP as the victim now. Very soon, it will be clear to all that the PDP has become a party of the South South and the South East just as was the case with the APP in 1998 when its root was mainly in the North West and the North East. You just wait and see,” the source, who is close to a powerful traditional ruler in the north, told Saturday Tribune.

The Arewa agenda is, however, reported to be facing stiff opposition in the Middle Belt region where a combination of religious factor and strong anti- Hausa fulani sentiment is helping the ruling party.

PDP regains lost members in Kaduna
Meanwhile, in Kaduna State, the fortune of the PDP appears to be rising, as some members of the party who earlier left the party in the state have started returning, including Hon. Hussaini Dembo, who was a Zonal Publicity Secretary of the PDP in the North-West.
Dembo is said to have confessed that after leaving the PDP about a year ago due to some internal problems, he had been in the wilderness and had to return to the party he had helped build and nurture.

Dembo vowed to also bring along his teeming supporters from Southern Kaduna back to the party.

While receiving Dembo at the state PDP Secretariat in Kaduna on Friday, the Chairman of the PDP in the state, Dr. Abubakar Gaiya Haruna, described the defection (of PDP members) to the opposition party as “political madness” and advised the media to be wary of some reports that might be exaggerated to score cheap political scores.

He said the PDP in Kaduna is solid and would continue to be the party to beat in the state, and that the APC would soon lose more of its members to the ruling party.

A’Ibom PDP urges Jonathan to contest in 2015
Meanwhile, the Akwa Ibom State chapter of PDP has passed a vote of confidence on President Goodluck Jonathan, urging him to contest the 2015 general elections.

An Akwa Ibom State government official who disclosed this to Saturday Tribune said a motion was moved on Thursday in Uyo, the state capital, at an enlarged meeting of the state caucus of the PDP, which was attended by the Deputy National Chairman of the party, Chief Uche Secondus.

In a motion moved by Senator Ita Enang (representing Uyo Senatorial District) and seconded by Elder Udo Kerian Akpan, Deputy Speaker of Akwa Ibom State House of Assembly, the state chapter of the PDP stated: “In 2014, when the respective parties will have to produce their candidates for respective offices, as will be declared by INEC, it is important to consider the candidate for the Presidency.

“We want to move that President Goodluck Ebele Jonathan, having credibly and creditably led this country, diversified the economy from oil to agriculture, successfully privatised the power sector, unified the country, successfully handled the security challenges in Nigeria and brought Nigeria to the eye of the international community through diplomacy, this audience do resolve that we pass a vote of confidence and urge Goodluck Jonathan to go ahead and contest the nomination of the PDP and contest the 2015 election as the candidate of the Peoples Democratic Party.”

APC ‘ll fail in 2015 —PDP
Secondus commended the PDP stakeholders in the state for holding onto the party from inception in 1999, adding that the PDP at the national level was very proud of Akwa Ibom State and its governor, Godswill Akpabio, for what he is doing to transform the state.
Secondus remarked: “I am overwhelmed and I believe that Akwa Ibom is setting the pace for the entire country to follow. The 2014 campaign is going to revolve around ward chairmen. The entire Nigeria should know that PDP is well rooted in all the wards of the country. We have over 9,000 wards across the country with PDP offices.

“I want the opposition party to challenge me if they have offices in these wards across this nation. PDP will win the election that is coming in 2015 because we are rooted in these wards. This is one secret the opposition does not know. They believe in blackmail and propaganda. It can’t work.”