North killed our proposal for self-determination at confab —Prof Nwabueze 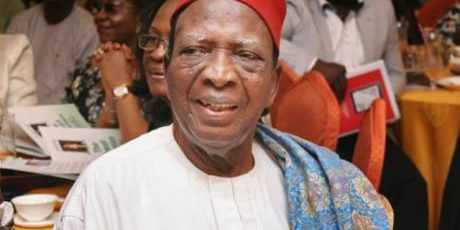 Professor Ben Nwabueze, a constitutional lawyer and Chairman of the Igbo Leaders of Thought, speaks with journalists after a meeting of the group in Enugu, on a number of issues, including the ongoing national conference, regionalism and the right of self-determination JUDE OSSAI brings these excerpts:
What would you say will be the effect of the outcome of this meeting on the cause of the Igbo people?The outcome of meeting is the reaffirmation of our cause, the objectives of the Igbo Leaders of Thought. It is transformation of Nigeria into a new, better and united country; that has been our objective from the beginning. Secondly, we reaffirmed our position that the objective could not be achieved without a people’s constitution. By people’s constitution, we mean a constitution adopted at the national conference and ratified or approved at a referendum of all the people of this country. That we note that what is going on in the national conference is not designed to achieve this objective. We noted the fact of the rowdy session over the alleged fake draft constitution said to be smuggled into the assembly and that the secretariat was lobbying some northern delegates to support the adoption of the fake draft constitution.
As far as we are concerned, this is a pity; even more than a pity because it’s a tragedy. We reaffirmed that without the people’s constitution as earlier defined, there is no way you can achieve the objectives of this body and the objectives of Ndigbo.
What then becomes of the Ndigbo interest in the scheme of the larger national interest?We also noted that perhaps, one of the two strategic interests of Ndigbo which we are hoping to achieve through the national conference is the zonal structure of the Nigerian federation. That is, the creation of six or more zones in the country within the existing 36 states being retained as part of the federal structure. In other words, a kind of federation upon federation; we start with the 36 states as the basic federating unit, retaining their powers under the existing constitution and going from there to the zonal government, six or more of them and from there to the Federal Government.
We believe that this is strategic to the interest of Ndigbo because if we cannot achieve the kind of autonomy that we desire under the existing structure of 36 states, going from there to the Federal Government may be problematic. The existing 36 states are not able at all to be effective in administering the kind of powers and finances that could be devolved on them. They will not be able to administer this effectively.
Every experience points to this and so if you want to reduce the powers of the centre, which is the problem we are having today, an over-powerful centre, you must take away some powers from the centre. And when you do that, to whom do you give this. To the existing 36 states. But, they certainly will not be able to shoulder the additional powers effectively as they are and they will not be also in a position to administer the money that will be taken away from the centre and given to the federating units.
So, all of this point to a new structure that will be-the Federal Government at the centre, the zones, six or more; and then the states. As I said, this is strategic to the interest of the Igbo because it conduces to the autonomy that we want-Ndigbo in the new Nigeria that we envisioned.
And secondly, strategic to the interest of Ndigbo is the question of the right of self-determination. In our write ups, we devoted a lot of pages to the question of the right to self-determination. But, these proposals have been turned down by the national conference at the behest of the North. They killed the idea of the six zonal structure and they have also killed the idea of self-determination.
Now, what is the way forward?The Igbo Leaders of Thought will work with Mr President. I made that promise and I got this meeting to agree to that. But the condition is that we the Igbo Leaders of Thought will be working with the president on the condition that the president also is willing to work with us. The president must be willing to work with us. When I met with the First Lady, she said to me that she would have taken me straight to see the president but unfortunately, the president was out of the country at the time. So, we remain open to a meeting with Mr President and a select group of our leaders .
When is such meeting going to be because the conference will be rounded off at the end of this month?As soon as I return from abroad for further medical treatment, although I don’t know how long I will be away, we will get in touch with the Presidency again to organise a meeting between us, the Igbo Leaders of Thought… to explore a way forward; to put the idea that we have across to Mr President and discuss with him.
We have also talked about the security situation in the country, the menace of Boko Haram. There are indications that they are infiltrating the South- East. So, we discussed ways we try to handle it. And we authorised our secretary, Professor Elo Amuchazi to set up a committee to do an elaborate and thorough study of the situation and make suggestions and recommendations to be submitted in our next plenary session.