Nobody Can Stop Jonathan From Contesting In 2015, Edwin Clark Says 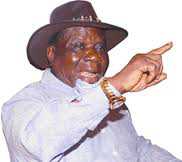 “Nobody has a right to stop him from contesting,” he said. “Every President who have ruled this nation spent two terms.”
Nigerian Former Minister of Information, Edwin Clark, announced today in Abuja that President Jonathan can–and will–contest for the Presidency in 2015.

At a meeting of the group “Northern Women in Politics”, Clark said that Jonathan was both qualified and deserving of a second term.

“Jonathan will contest in 2015 because of two things; one, he is qualified to do so under the law and secondly, he has performed well to the extent that those who voted him in 2011 are willing to do so again,” he stated

Clark also supported his justification by adding that every Nigerian president thus far has had two terms in office. “Nobody has a right to stop him from contesting,” he said. “Every President who have ruled this nation spent two terms.”

“Everybody in this country is created equal, no matter the tribe, gender or background as long as such person is a Nigerian and educated. When people who are close to Jonathan advised him to appoint someone from the South South as IGP, he said no. This is because, he is not sentimental,” the former minister stated.

Clark also spoke on the rescue of the Chibok girls, abducted four months ago. He claimed they would return, and that their situation did not call for force. “If President have used force to free the girls, some of them would have died, and the same people will still shout that Jonathan have killed our girls,” Clark said.

“Those girls will come back to join us to build the nation,” he added.