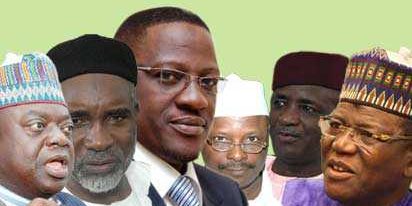 STRONG indications emerged, yesterday, that an end to the lingering political quagmire rocking the ruling People’s Democratic Party, PDP, is not in sight as the Abubakar Kawu Baraje-led faction accused the party National Chairman, Alhaji Bamanga Tukur of not being serious with peace moves. This came just asthe nPDP said that it has not entered into any deal with President Goodluck Jonathan.

The group, therefore, urged Nigerians to ignore what it described as “the tissue of lies and propaganda from the Alhaji Bamanga Tukur faction of the party on the outcome of our meeting with President Jonathan at the Presidential Villa last Sunday, September 15, 2013”.

In a statement signed by its National Publicity Secretary, Chief Eze Chukwuemeka Eze, the Baraje-led leadership stressed that if there was any serious commitment on the part of Tukur, there will be no caretaker committee for Kano State chapter which was designed to humiliate Governor Rabiu Musa Kwankwaso, a few hours after the Sunday peace meeting with President Jonathan.

The Baraje-led nPDP in its statement said: “We have read various misleading accounts of what transpired at that meeting between our progressive governors – Gov Kwankwaso of Kano, Gov Wamakko of Sokoto, Gov Amaechi of Rivers, Gov Babangida Aliyu of Niger, Gov Nyako of Adamawa, Gov Ahmed of Kwara and Gov Lamido of Jigawa with President Jonathan on how to resolve the self-inflicted crisis in our party.

“We wish to specifically urge Nigerians and our supporters to ignore the concocted tales of Gov. Godswill Akpabio of Akwa Ibom and chairman of PDP Governors’ Forum. Akpabio lied by claiming that we have accepted that President Jonathan should contest the 2015 presidential election and that most of our demands are being met. The fact of the case is that no agreement has been reached on any of the issues we tabled before the President and until we see results, Nigerians should ignore the present efforts by the Tukur camp to deceive them.

“On whether President Jonathan should contest the 2015 presidential election or not, we wish to say that we have a mechanism and system of electing our flag-bearers for any election and until the time to choose the party’s presidential flag-bearer comes, any speculation on this is just a mere academic exercise.”

Tukur not ready for peace

Accusing Tukur of not being serious with peace moves, the nPDP said: “Meanwhile, we have been vindicated in our claim that Alhaji Tukur and his faction are not serious about their purported search for the return of peace in our party.

Just few hours after Sunday’s meeting between the progressive Governors and the President, Tukur’s faction once more showed its disdain for peace by unilaterally setting up a Caretaker Committee to run the affairs of our Kano chapter.

This was done without recourse to either the leader of the party in Kano State, Gov. Rabiu Kwankwaso, or other stakeholders of the party from Kano. This illegality is a clear violation of our party’s constitution and was hurriedly done just to spite Gov. Kwankwaso, the Party Leader in the state.

“We hereby urge our people in Kano State to ignore this illegality as we have set in motion the machinery to organise a proper election as stipulated by our party’s constitution.

“We are still at a loss why Tukur and his cohorts do not want peace to reign in PDP but no matter the odds, we are very determined to ensure that peace is restored to our party with the prayers of Nigerians.

“Along this line, we once more appreciate the efforts of our Party Elders to resolve the current crisis bedevilling our party and wish them success irrespective of the evil designs of Tukur’s faction to elongate the crisis for selfish reasons.”

Meanwhile, a reliable source present at the meeting held last Sunday between the Presidency and the aggrieved PDP governors, dubbed the ‘G7’, told Vanguard that the governors wanted to use the ‘simple hurdle’ to test the sincerity of President Jonathan and the leadership of the party towards resolving the crisis rocking the party.

According to the source, the governors are waiting to see if the President would seek their inputs in the selection of ministers from their respective states to replace the ones sacked by him last week.

A governor, who was at the Sunday meeting told Vanguard, yesterday, that they doubted the sincerity of the President to involve them in the search and selection of new ministers from their respective states, given the way the former officials were sacked by him.

The governor pointed out that their scepticism over Jonathan’s adherence to the ceasefire announced last week, stemmed from the fact that the President was fond of using and dumping those who work for him, citing the experience of five former PDP governors, whom he relied on to win the 2011 Presidential election, to buttress his point.

The governor said: “We don’t really believe that the President is serious about peace because he can easily change his mind after an agreement.

“Look at what he did to the former governors of Gombe, Oyo, Ogun, Nasarawa and Bayelsa, whom he relied on to win the last election and you will understand what we mean.

“Before the election, the President had pleaded with the affected former governors to mobilise support for him to win the poll in return for the offer of some juicy appointments.

“But unfortunately, once he (Jonathan) won the election, his promise of appointing some of the former governors as ministers and ambassadors was jettisoned and many of them are angry with him today for failing them,” the governor pointed out.

Another governor, who attended the peace parley with Jonathan last Sunday noted: “We cannot just trust them and go to sleep while the Presidency and the Tukur-led PDP are fast restructuring the party in our states under the guise of peace.

“We have given them some tests to determine how sincere they are in putting an end to the crisis rocking the party,” the governor said.

It was learnt that the governors had already mobilised majority of their senators, who are still loyal to them, to watch out for the list of ministerial nominees from the affected states and block their nominations should the President unilaterally appoint them without involving them as critical stakeholders.

Reacting to a question on Jonathan’s second term bid, one of the governors made it clear that they were not opposed to his second term bid as long as he complied with the Constitution of the Federal Republic of Nigeria and the party in going about it.

“If he is qualified to stand election in 2015, so be it. But if doing so contravenes the law, he should take the necessary step,” the source advised.

Vanguard learnt the G-7 group was convinced that except the crisis in the party was amicably resolved and they and their supporters carried along, it would be very difficult for Jonathan to be re-elected in 2015.

It was also learnt that some aggrieved political leaders would soon approach the Supreme Court to clear the air on the suitability or otherwise of Jonathan’s bid to contest the 2015 election.

The aggrieved governors had last week met with President Jonathan and the leadership of the PDP at the Presidency Villa on Sunday for many hours in what was described as a ‘make or mar’ meeting to sort out the crisis in the party.

At the end of the meeting, the two parties agreed to observe a three-week ceasefire and report back on October 7, 2013.