NO CRIMINAL CAN SURVIVE IN AKWAIBOM —Akpabio 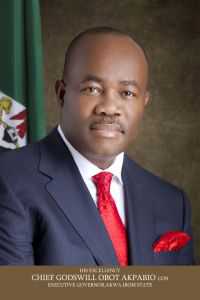 Governor Godswill Akpabio has declared Akwa Ibom unsafe for criminals, saying no criminal can survive too long in the state.

He made this declaration when the National Chairman of Association of Retired Officers of the Department of State Security Service, Mr. Amadu Udoh, and his team paid him a courtesy visit at Governor’s Office, Uyo. “The state is a no-go area for criminals,” the governor declared.

He said apart from the activities of militants in the riverine areas, there is also reported insurgency of sea pirates responsible for crude oil theft, and charged unscrupulous elements to desist from such in the interest of peace and development of the state.

The governor pledged his continued partnership with the security chiefs in keeping the state safe, thanked them for their contributions in this regard and donated an 18- seater bus to the body.

Akpabio thanked the association for the award of Grand Patron conferred on him, saying: “I will be glad as the Grand Patron to assist in whatever way for the association to succeed. And I must also thank President Jonathan for the department of state services in spite of the security challenges for society can’t be free from crime. That’s why we have intelligent agents to cope with the crime.”

He dedicated the award to security chiefs in the state and remarked: “Members of the association are well-trained and are patriotic

Nigerians. Without the sacrifice of the men in uniform, we won’t sleep with our two eyes closed. That is why I must thank u all for keeping the state safe. I must also congratulate all of you for serving the country and returning in good health.”

Also speaking, the National Chairman of the association, Mr. Udoh, said that the honour bestowed on the governor was to acknowledge his valued contributions to the country, and to appreciate him for his uncommon leadership style which has taken the people of the state to a greater height and has created a positive impact in the state.

Udoh said their visit was to demonstrate their total loyalty to a visionary leader and to applaud the Governor for his achievements to the state through quality projects that would serve as a legacy of his administration.

Mr. Mike Ejiofor, a one-time Director of State Security Service in Akwa Ibom, applauded Governor Akpabio for the massive road construction and high quality of massive infrastructure in the state.