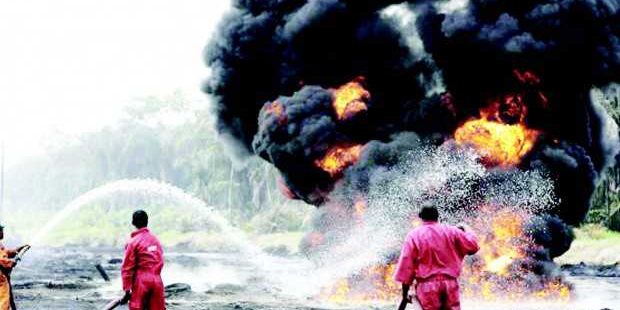 Fears of possible shut down of Warri and Kaduna refineries have heightened as the pipeline which conveys crude oil to the two plants have been damaged at several points by impoverished local populations.

The pipeline, spanning about 60 kilometres to WRPC was damaged in the creeks of Kokologbene community in Warri South- West LGA.

It was, however, gathered that the management of the Pipelines and Products Pricing Marketing Company, PPPMC, a subsidiary of the Nigerian National Petroluem Corporation, NNPC, had mobilised in-house technicians to effect quick repair of the pipeline to avert the closure of WRPC and KRPC, which might arise over shortage of crude oil for operations.

The oil thieves had vandalised the pipeline, operated by NNPC, at several locations in the past two months.

The illicit oil dealers reportedly siphoned crude oil into vessels and for the operation of illegal refineries.

The oil thieves had mobilised a vessel, MT Cape Hope, and operated some illegal refineries at the scene before the management of PPPMC Warri Area Office, led by Mr. William Enoh, mobilised the Joint Task Force, JTF, Operation Pulo Shield, to abort the illicit trade.

The vessel was promptly impounded by the JTF and subsequently detained at the jetty of the Nigerian Ports Authority, NPA, in Warri. Reliable sources in JTF said that the facility for the prohibited business had been handed over to the anti-graft agency, the Economic and Financial Crimes Commission, EFCC, for further investigation.

Abandoned illegal refineries dotted the scene while no fewer than 42 pits, which served as storage tanks for stolen crude, were dug in the area.

The oil thieves also installed networks of pipelines to facilitate the transfer of the crude into the vessels and to the illegal refineries. Some makeshift structures were erected at the scene and items of the illicit trade and household goods, including generators and fans littered the area.

Already, the management of PPPMC had mobilised in-house technicians to ensure early repair and restoration of operation by the strategic pipeline.

It was gathered that the repair work would gulp about N50 million. Reliable sources in PPPMC told National Mirror that the management decided to deploy in-house technicians to cut costs.

One of the sources said that it would have cost NNPC over N200 million if the repair job had been awarded to a contractor. PPPMC’s Area Manager in Warri, Mr. William Enoh, declined comment, saying that he was not permitted to grant press interviews.

Enoh, however, referred our correspondent to the Commanding Officer, 3rd Battallion of the Nigerian Army, Efffurun, Col. Ifeanyi Otu, who could not be reached for comment at the time of filing the report yesterday