Nnamdi Kanu Honoured as the Great Liberator of Ndigbo 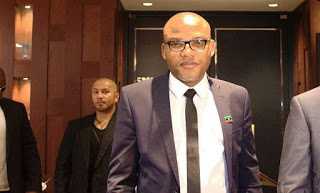 Nnamdi Kanu Honoured as the Great Liberator of Ndigbo

The detained leader of the Indigenous People of Biafra, IPOB, Mazi Nnamdi Kanu, was recognized as the “Great Liberator,” of Ndigbo by the Igbo Youth Movement, IYM, during the 17th Annual General Convention of the umbrella association of all Igbo youth socio-political unions which took place in Enugu. The award from the IYM was jointly received on behalf of Kanu by Emma Powerful of IPOB and Uchenna Madu of MASSOB amidst thunderous ovation.

The convention which has elicited hope in the youths was attended by the former Vice President, Dr Alex Ekwueme, a Yoruba leader, Chief Ayo Adebanjo, former Minister of Information, Professor Jerry Gana (both of who received the Great National Icon awards in recognition of their consistent contribution to national growth), former Governors of Anambra State, Dr Chukwuemeka Ezeife and Peter Obi (Okwute Ndigbo), the leader of Igbo Women’s Assembly, IWA, Chief(Mrs) Marie Okwo as well as and the National Leader of the Niger Delta Self- Determination Movement, NDSDM, Mrs Annkio Briggs among other notable personalities.

There was Wild jubilation in the hall on the mention of the award. None of the awards mentioned elicited more wild scenes of jubilation in the hall than Nnamdi Kanu’s. The Founder of IYM, Evangelist Elliot Uko expressed optimism that the Federal Government would listen to the voice of Nigerians by restructuring Nigeria which he said was practicing a “unitary” system of government against the wishes of the generality of the people.

Uko in his speech said,

“…The centrifugal forces pulling on all sides, clearly indicates that Nigeria might burst at the seams.

“The truth about our dear Country is that some people have a post-1970 mind-set. They want to take back Nigeria to the heady days in the early 1970’s when their word was law; when everybody trembled at their presence; when they shared our patrimony according to their whims, while the whole country worshipped them as the victorious army of conquest.

“They find it hard to see, that the unitary structure they instituted cannot carry us through. They refuse to accept the fact that the present 36 state structure is unsustainable. As their old and archaic thoughts about Nigeria, clashes with the reality on ground, they erroneously resort to brutal suppression of the truth, in the false hope that the people would be cowed into submission.

“The result is endless massacre of compatriots in cold blood like we saw in a school compound in Aba, Abia State on February 9, 2016, and in a church at Nkpor, Anambra State, on the night of May 29 and early morning of May 30, 2016. “They still believe that this genocidal killing will help them hold down Nigeria by force and sustain this unworkable unitary structure.

The truth is that this unitary structure is unworkable and Nigeria will never know peace, unless we restructure Nigeria along the lines of true federalism. “Killing young people in cold blood, just because they say they are tired of the iniquities of oppression and litany of injustices that abound in Nigeria is despotic, to say the least. Scottish nationalists went out of UK, marched in the streets with their Scottish flags; nobody killed them in cold blood.

“In Canada, Spain and elsewhere self-determination movements demand their separate states; nobody orders their killing in cold blood. If a section of Ghana or South Africa were to root for self-determination, we know that John Mahama or Jacob Zuma will not order their cold blooded killings.

“Killing those young men in cold blood has suddenly earned them so much sympathy and popularity that they are seen as heroes down here. About 99 percent of Aba people; old eastern region are angry and very bitter about the Nkpor massacre of May 30.

“This government has slowly alienated itself from the people. Refusal to restructure Nigeria now, simply means that the future is very bleak.”

Former governor Obi stressed that he supported the restructuring of the country on the basis of fiscal federalism, but stressed that while that was being addressed, there was a need to urgently address the high cost of governance in the country. Obi said that any governor who said he could not pay salary should give way to other persons with better ideas.

Ezeife, who also received the “Igbo Peoples General award” stated that the 2014 national conference report recommended an additional 18 states to bring into being a 48 state structure in order to address some inequalities created by the military. In his view, all the six proposed zones would have the same number of states to ensure that none was cheated

Briggs said that the country was so lopsidedly run that the Federal Government which should depend on taxes from the regions was now giving the crumbs from the very regions which fed it fat.

She also lampooned the Federal Government for threatening to destroy the Gbaramatu Community in the Niger Delta Region if the people of the area failed to produce General Tompolo over alleged civil offence having to do with contractual agreements while turning a blind eye to those who beheaded an Igbo woman in Kano for alleged blasphemy.

According to her, the Federal Government should ask both the Governor and Emir of Kano to produce the killers of the Igbo woman in their domain instead of purportedly arresting suspects for the heinous offence.

“A governor blasphemed Jesus Christ in the north but he is still serving in that office today. Blasphemy is not part of our national law. How can the ruling government say that it will work for 95 percent of Nigerians who voted for it with the resources from the five percent that did not vote for it? We are asking for resource control.

“Why should somebody who has never drank the polluted water in the Niger Delta ask us to account for 13 percent derivation when he cannot account for the 87 percent allocations that he takes?” she said adding that any change mantra that was not based on truth was deceptive.