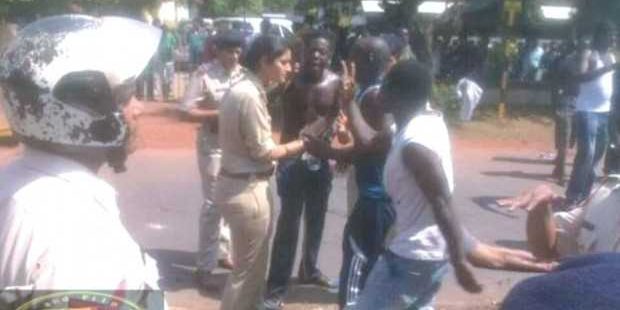 Nigeria told India, yesterday, that it fears for the safety of its nationals in the resort state of Goa after one of its citizens was slain and a local legislator compared Nigerians to “cancer.”

Tensions have been rising in the tiny, palm-fringed state since a Nigerian man was stabbed to death last week in a murder that police blamed on rivalry between local and Nigerian drug traffickers.

Local media reports said the Nigerian was hacked to death by a group of Goan drug traffickers, while five other Nigerians suffered stab wounds.

Goan police arrested 53 Nigerians last week after around 200 of them staged a protest against the killing, chasing a police hearse carrying the corpse of the dead Nigerian and putting the body on the road.

Following the demonstration, which blocked Goa’s main highway for several hours, Goa’s chief minister Manohar Parrikar asked police to track down Nigerians living illegally in the former Portugese colony so that they could be deported.

After the protest, a minister in the state’s Hindu nationalist Bharatiya Janata Party government, Dayanand Mandrekar, stirred more controversy by saying: “Nigerians are like cancer”.

Nigeria’s High Commission issued a diplomatic note and demanded on Tuesday that the security of its nationals be assured. It also called for the immediate arrest of those who killed its citizen.

“We have lost one of our nationals in a cold-blooded murder,” Nigerian High Commission press spokesman Tokunbo Falohun told the Press Trust of India.

“The guilty should be immediately apprehended and brought to justice and they should also compensate the family of the victim,” the envoy said.

The previous day, another High Commission official warned of repercussions against Indians living in Nigeria if Goa did not stop “evicting Nigerians” from the state and failed to arrest the killers.

Asked if there will be any “repercussions” from the murder, Falohun said Tuesday there would be none if the matter was “justifiably” dealt with by Indian authorities.

“There is a large Indian community working in Nigeria. There are two temples in Lagos and all Indians have freedom to worship and for their other activities. We also are demanding the same,” Falohun said.

Meanwhile, India’s foreign ministry spokesman Syed Akbaruddin said in New Delhi that he was sure that the row could be settled “amicably”.

“We have been assured that the investigation (into the murder) is underway,” he said.

Goa has been seeking to restore its image after a string of crimes. Legislators have said the state is in the grips of a drug war.