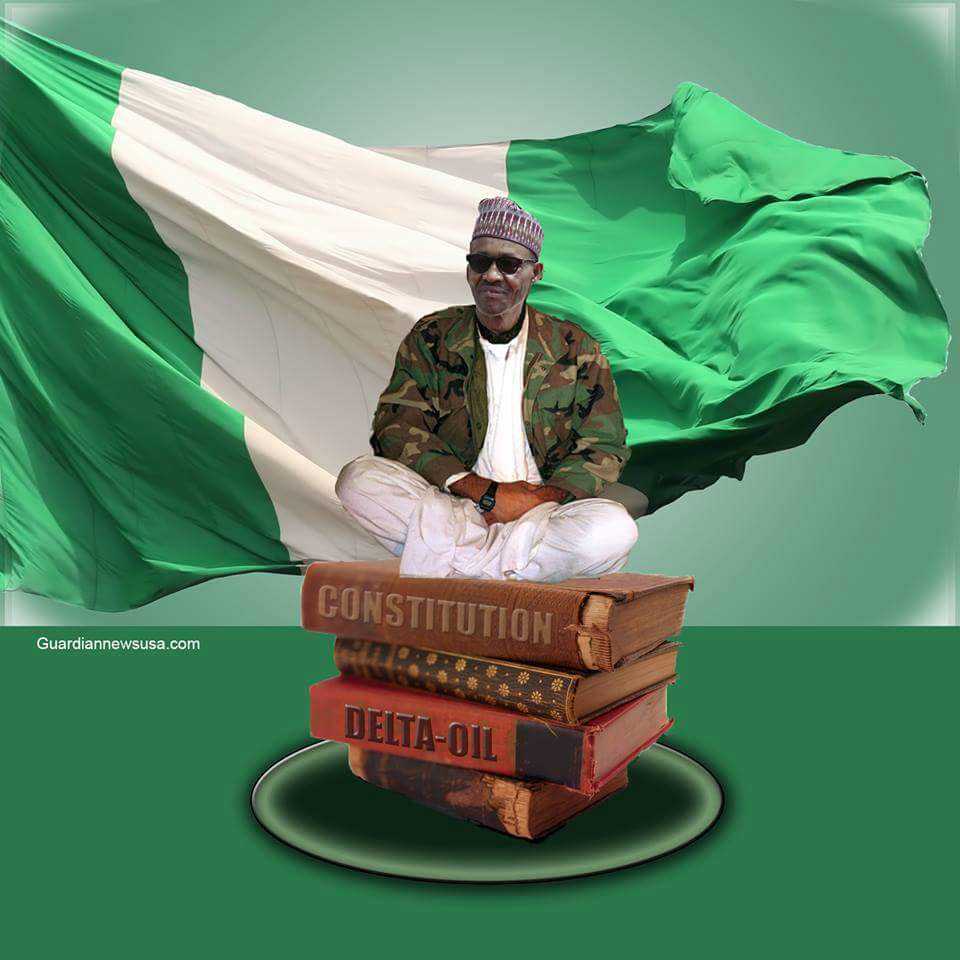 Nigerians are terrorists
By Tim Tochukwu

This piece is in response to an article written by a Nigerian who, it seems, joined the campaign spearheaded by agents of Nigerian government against radio Biafra, and (by implication) Biafrans. The writer (with a Biafran name – Peregrino Brimah), published the article with the title: “Before The First Eastern Bomb: Declare Radio Biafra a Terror Organisation”.
Part of his intro stated: “Listening to the publicity available from the archives of the past few days of the Radio Biafra show, since the deadly “shootout” at Onitsha on Sunday August 30th, one hears only the drums of war, or rather terror”.
Now, notwithstanding the clouded thinking in the intro, (possibly to confuse), Brimah’s article goes to prove one incontrovertible fact, that Nigerians are liars, lying all their lives from birth, a bug they caught from the British that created the evil contraption. This Brimah article is another of such lies of Nigerians.
To start with, what happened on the said date at Onitsha, the economic capital of Anambra State, was not a shootout as the liar wants his readers to believe. It was a terrorist act and cold-blooded murder perpetrated by Nigerian Navy (operating on land) and the Police against Biafrans. The idea was to strike fear into those Biafrans, just to dissuade them from engaging in their legitimate aspiration demanding their freedom from an expired country, Nigeria.
But as usual, not only Brimah and his ilk are in on this wicked campaign, the whole Nigerian media are in on it, and all went to town to tell lies about what took place that day.
The fact of the events of the day was that Biafrans were walking along the streets of Onitsha, peacefully sharing fliers to fellow Biafrans on the need to join the struggle for their freedom, when the Nigeria Navy struck. Numbering up to 5, 000, the Biafrans had gone past the Army Barrack at Boromi Round-about, but none of the Army personnel massed around the area challenged them. Instead, many of them (the Army personnel) stepped forward to collect the fliers the people were sharing. They even went as far as congratulating the people on their peaceful conduct, urging them to continue since their agitation was peaceful and legitimate. When they also went past a Police Check-point, same scenario played out.
It was as they approached the Onitsha bridge-head that the shooting took place. Without warning, soldiers at the Navy Check-point (a check-point deep on land and away from sea), pointed their guns at the crowd and started shooting. The people took flight, but many were shot; three of those shot were later to die in the hospital. They died from excessive bleeding because doctors refused to treat them until they produced Police report.
The people were not armed; they were defenseless; and they were peaceful on that day.
But the ever-lying Lagos/Ibadan press went on to misrepresent the facts by lying that there was a clash and shootout. Biafrans are aware that they all always do this in a bid to support Nigerian government campaign to declare Radio Biafra a terrorist organisation. Another reason for the campaign is to provide a ground for another round of ethnic cleansing of Biafran peoples as was done from 1966 to 1970. That action took the lives of nothing less five million people, many of them children, women, the aged and the sick.
As a matter of fact, that is already happening. Biafrans are being murdered in cold blood by agents of Nigerian government everywhere, both in Biafraland and beyond. People are being kidnapped from their homes under different guises; and there is on the whole a release of terror against the Biafran peoples to cow them from rightfully agitating for their freedom. Muhammadu Buhari’s goons are all over Biafraland, arresting Biafrans – even those travelling abroad on business and seizing their Dollar currencies. Also those with Radio Biafra App on their phones have not been spared.
The latest is the arrest of Nnamdi Kanu, the Director of Radio Biafra and Biafra Television, and leader of Indigenous People of Biafra (IPOB) worldwide.
But Biafrans are not terrorists; they have never been. They have never perpetrated any act of terror in history – both locally and internationally. Since Britain occupied Biafraland by force of arms during the colonial days, up till the time they aided the Fulani to do same in between 1967 and 1970, what the Biafran peoples have always done was defend themselves, their land and their culture. When Britain was handing over the direct governance of the wicked contraption in 1960, it also gave them guidelines on how to continue with the terrorism and subjugation of Biafrans so as to make the oil fields in Biafraland available to them.
The Yoruba people have also stealthily joined the Fulani in the atrocious acts against Biafrans, all for the same purpose – oil. Since 1960, the Fulani people (in consort with the Yoruba people) have done just that. They have terrorized Biafrans at every turn in order to steal their wealth. Of course, this has always been under the direct supervision of the British government.
Therefore, the terrorists are Fulani and Yoruba people. They are the ones driving Nigeria, and they are the ones giving it the atrocious toga it is having in international community today. Throughout their history Fulani and Yoruba people have always perpetrated one terrorist act or the other. We could easily point to some individuals and groups of Fulani and Yoruba that have done this.

Some Nigerian terrorists
One Umar Abdul Mutallab, a spoilt Fulani child, is a confirmed terrorist. Even at the youthful age of 24, he was caught pants-down about to detonate a bomb to kill 289 Americans in a US bound flight on Christmas Day, December 25, 2009. The Northwest Airlines Flight 253 was en route from Amsterdam to Detroit, Michigan.
He was a Fulani Nigerian; not Biafran.
Michael Adebolago and Michael Adebowale were also terrorists. They were Nigerians of Yoruba ethnic stock. On the afternoon of May 22, 2013, the duo descended on a British soldier, Lee James Rigby, at the Woolwich, Royal Borough in London, and stabbed him to death in cold blood. After the despicable act, the duo faced television cameras to boast about the murder they had just committed.
They were Yoruba Nigerians and not Biafrans.
August 8, 2015, two Northern youths, Imran Kabeer and Sani Jamiliu, were arrested in India. They were going to join ISIS in their quest to rule the world. They were not Biafrans; they were (and still are) Nigerians.
Sanusi Lamido Sanusi, the one that is now the Emir of Kano and formerly Nigerian Central Bank Governor, was the terrorist who killed Gideon Akaluka and told his jihadist followers to hang his head on a poll and carry it round the streets of Kano. It has long been established that under him as Nigerian Central Bank Governor, his office was used to move funds to Boko Haram.
What about Muhammadu Buhari, the so-called Nigerian President. Who in the world today does not know that he is not only a Fulani and a Northern Muslim jihadist, but also a pedophile and terrorist? It was he who boasted before the 2011 General Election that if he did not win that year’s Presidential election that he would make the country ungovernable. He lost the election, and scores were murdered in Northern Nigeria, even youth corpers – those drafted to the accursed desert lands of the North to lend a hand in salvaging the people from their backwardness – were murdered.
Before the 2015 election Buhari boasted again. This time that he would make the monkeys and baboons (his fellow countrymen) soak in their own blood if he did not win the election. Today, it is only the lying Nigerians that would claim they did not know that his was many such boasts from him and his terrorist gang from the North that frightened Goodluck Jonathan to quickly throw in the towel in the brazenly and highly rigged election? Painfully, he was support by Barrack Obama of United States of America (USA) and David Cameron of United Kingdom (UK), the modern day colonialists and terrorist sponsors.
Buhari has never hidden his predilection to terror. It was him who once told bewildered Nigerians that any attack on Boko Haram was anti-North and attack on the North. Buhari, it was who lampooned former President, Goodluck Jonathan, for declaring a state of emergency on the states that Boko Haram was wreaking havoc on. He was also the one that once declared that: “Sharia should be introduced in full across Nigeria …I will continue to show openly and inside of me the total commitment to the Sharia movement that is sweeping all over Nigeria”.
It was under terrorist Buhari that Nigeria granted a wanted radical Muslim cleric, Ahmad al-Assir, visa to come to Nigeria and hide from the prying eyes of the world. The terrorist was arrested by Lebanese authorities as he attempted to leave Lebanon for Nigeria via Cairo, at Beirut’s Raffik Hariri International Airport. His arrest was on Saturday, August 15, 2015, and he was travelling with a Palestinian passport and valid Nigerian Visa as Rami Abdul Rahman.
This illiterate terrorist, Buhari, a child-rapist (pedophile) is a Nigerian. He is not a Biafran.
It is undisputed fact that Buhari and his Northern kinsmen are terrorists, and that they are at home with terrorist from all over the world. During the heydays of Osama Bin Laden, they were the ones that wear Bin Laden’s T-shirts as their hero in Northern Nigerian streets. When the twin-towers of America was bombed in the USA, they were the ones that celebrated it in Northern Nigerian streets and towns by burning USA flag in different places.
Boko Haram, the African number one terrorist group is Hausa/Fulani owned. It is indeed a brainchild of prominent Northerners like Sanusi; Buhari; Atiku Abubakar, former Vice President; Ibrahim Babangida, former military dictator.
The Northern plot to continue to terrorize other peoples inhabiting the evil contraption called Nigeria and to take their resources by force, did not start today. Actually, their political and spiritual leader of the 60s, Ahmadu Bello, was the one who charted the course, and laid the foundation for the Northern people’s predilection to terrorism. It was him who once declared that without the North dominating others it would “lead to bloodshed”.
He followed it up with a declaration, few days after Independence that, “The new nation called Nigeria should be an Estate of our great grandfather Uthman Dan Fodio. We must ruthlessly prevent a change of power. We use the Minorities in the North as willing tools and the south as a conquered territory and never allow them to rule over us and never allow them to have control over their future”.
The declaration was recorded in the Parrot Newspaper of October 12, 1960, 11 days after Nigeria’s flag independence. That is part of the root of Fulani terrorism that has festered over the years. Therefore, let no one be deceived, the terrorists in what is known as Nigeria today are elements from other parts of Nigeria, but not Biafrans. They are the ones that have made Nigeria a terrorist state because the levers of power rest in their hands.
Even as this article is being published, Fulani herdsmen bearing AK47 rifles (in a country where arms are supposedly prohibited) are ravaging communities from middle parts of the country to the south unchallenged.
So let the world be well guided on this – Nigerians are terrorists, especially the Fulani people; but Biafrans are not.