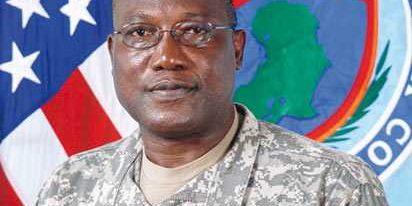 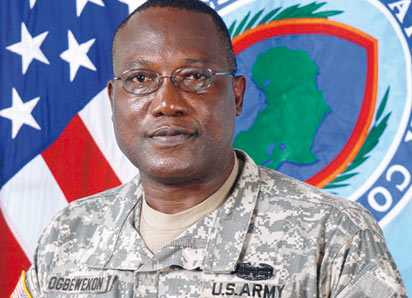 MAJOR Wisdom Osagiede Ogbewekon-Osemwende is a Nigerian serving in the United States Army; he served in Iraq during the American/Iraqi war.

A member of the Benin royal family, he is currently attached to the African Command in Germany. In this interview conducted by telephone, he spoke on the security challenges facing the country and how the Boko Haram insurgency can be tamed. Excerpts:

On security challenges in Nigeria
Terrorism is an enduring situation worldwide. In Nigeria, this is causing a lot pains to the people and the armed forces. The extreme ideology of the Boko-Haram sect and what is happening in the North is very disturbing. Northern leaders such as the late Sarduana of Sokoto, Alhaji Ahmadu Bello, Alhaji Abubakar Tafawa Balewa; Mallam Aminu Kano; the late Major Gen Joseph Garba; and many others who labored to make the North what it is today will never forgive the sect for what they have turned the region into and I know that average northerners are good people and are not in support of what they are doing. I am however pleased with what President Jonathan is doing to curtail the insurgency and the Niger Delta militants and needs the support of all Nigerians.

On security challenges, the country needs to create special branches in the armed forces, that is, the army, navy and air force that would be given specialized training on how to handle terrorism; they should be able to fight on land, sea and in the desert. This special force should be deployed to the Gulf of Guinea to maintain peace in the area.

There should be combined operations involving the army, navy and the air force to curtail the activities of Boko Haram; it should not be left in the hands of the police or army alone.

Stability of operations
This follows after combined operations of the military. They must not leave the scene of operations immediately, they should stay to stabilize operations and return normalcy to the area.

Border patrol
A division that is made up of men and officers from all branches of the armed forces should be created to join the Customs, Immigration and police to patrol our porous borders with Cameroun, Chad, Niger, etc . They should effectively man the border points because this is where the Boko Haram people leave for Mali and Mauritanian for training. The Nigerian government should be prepared to spend money on technology, censors and radars should be mounted at sensitive border points to monitor what is going on.

The Federal Government can establish three central control divisions to man Nigerian/Cameroun, Nigerian/Niger, and Nigerian/Chad borders with radar installed to monitor the movements of people. The radar will send information to the central divisions and place those on patrol at alert. This is what the Boko-Haram people do and they move with ease in and out of the country to train in Mali and other countries. There is also the need to install underground sensors along the borders with our neighbours that will send signals to the central control system which, in turn, calls for air support in cases of emergency. The security agencies should train dogs to sniff persons and cars coming into the country because terrorism takes time to plan. It is not done overnight.

They select targets to be attacked, they have good intelligence network and so, to counter them, you must have an intelligence gathering system that is superior to their own.

How to defeat terrorism
Government should allocate more funds for the education of youths in the North; by so doing terrorists would not be able to brainwash or indoctrinate them on their cause. Northern youths should be able to compete with their southern counterparts in every field of human endeavours once they get the right education.

Nigeria should subscribe to the African Military High Command to make her strong in the continent; for training, special assistance, among others.
The police should be properly equipped, they should have a rescue combat training and, above all, Nigerians should have faith in the police and know that they are serving their interest. I recall hosting some Nigerian police officers sent to the United States on community policing with another Nigerian U.S. army officer, Lt. Col. Oronsaye, and we tasked them to ensure that the training they received in the U.S should be well implemented while back in Nigeria. While I commend the Inspector- General of Police, Mr. Muhammed Abubakar, for the innovation that he brought into the police, the men should be adequately funded, supported with adequate logistics provided, computerized vehicles for crime detection and arrests.

All Nigerians get national identity cards entered into a national data base. You must have records of people living in the country including foreigners.

The Federal Government should erect walls along our borders with our neighbours as the United States government did along its Mexican borders when it became clear that there were illegal aliens entering the country through its borders with Mexico.

The Boko-Haram sect and the Niger Delta militants should dialogue and embrace because there is no nation on earth that can survive two wars. Nigerians should give peace a chance.

Crisis in the Niger Delta and oil theft
It is regrettable that Nigeria reportedly lost about 191 Billion U.S. dollars to oil theft and vandalization. I commended the Joint Military Task Force set up by the government to tackle the issue. They should concentrate more efforts in tackling the issue and they should be properly equipped to provide security to Nigerians living in the region. The militants should embrace peace.