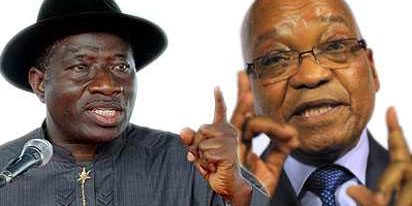 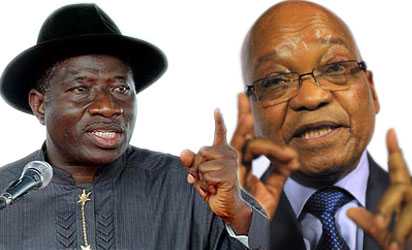 National Security Adviser, NSA, Sambo Dasuki, yesterday, raised the alarm that South Africa was out to frustrate Nigeria’s fight against terrorism by seizing funds meant for arms purchase and blocking moves to procure arms for the ongoing campaign against terrorism.

The government said that the development might affect the fortunes of South African companies in the country currently enjoying favourable government policies in addidtion to Nigeria’s commitment to South Africa’s independence.

Spokesman of the NSA, Karounwi Adekunle, told our correspondent in Abuja that government was worried over the development which he said had become evident that South Africa was celebrating Nigeria’s present terrorism travail.

South Africa is believed to be a close rival of Nigeria on the African continent and was said to be interested in anything that could cause the fall of Nigeria.

This is in spite of the support that it had received from Nigeria over the years, especially in its (South Africa’s) trying times of apartheid.

The NSA, who said that “the rivalry is too clear and close for comfort”, disclosed that Nigerian government had continued to do everything possible to favour South Africa’s nationals and businesses in the country, but expressed disappointment at the manner that country was handling issues concerning Nigeria and Nigerians.

Asked if government believed that South Africa was out to rubbish Nigeria, he said: “That is exactly what it is. With the behaviour, what else can one say? They are happy with our problems of terrorism. We’ve done a lot for South Africa and we can mention them. Look at their companies thriving very fine in Nigeria. Government policy is favourable even though company like DSTV charges much more than other operators,” Adekunle said.

South African authorities were reported to have seized another $5.7m arms money from Nigeria.

This is coming barely three weeks after seizing $9.3m transported by two Nigerians and an Israeli purportedly for arms purchase.

As with the first deal, South Africa’s Asset Forfeiture Unit of the National Prosecuting Authority seized the $5.7 million, approximately N952 million, for allegedly being the proceeds of illegal transactions, it was gathered.

Meanwhile, the All Progressives Congress, APC, has said that with the seizure of $5.7m of Nigerian arms money by the South African authorities, the nation is fast descending to a rogue nation.

The party, however, asked President Goodluck Jonathan to urgently address Nigerians on the serial embarrassments to which his administration was subjecting the country in the comity of nations.

In a statement issued in Lagos yesterday by its National Publicity Secretary, Alhaji Lai Mohammed, the party said the issues surrounding the first seizure of $9.3m had yet to be resolved before this latest scandal.

The party wondered why the government would want to turn Nigeria to a rogue nation by taking ownership of money laundering and other acts of illegality, thus devaluing the national currency.

‘’Again, Mr. President, Nigerians are urging you to please come clean over these cash-for-arms scandals. They want you to answer critical questions on the legality of your administration’s repeated conduct. They want to know the identities of the two Nigerians who were arrested with an Israeli in South Africa over the first illegal deal, especially since the Israeli has been named.

‘’Nigerians want to know why the purported arms procurement for the government is done illegally between private companies that are neither known nor registered for dealing in arms? And why is the movement of monies not transparently documented for what they really are, if they are truly for legitimate purposes?

‘’They want to know whether indeed the weapons which the government is seeking so furiously to procure are for the battle against Boko Haram or for a sinister motive, considering the desperation of your administration to continue to rule at all costs and by any means possible.

“They want to know whether every Nigerian should begin to fear what will happen in the days and weeks leading to the forthcoming general elections, against the backdrop of your administration and the party’s do-or-die politics.”

The party also wondered whether the funds being ferried up and down by the administration were appropriated by the National Assembly or whether they were part of the missing $20bn oil money.

APC slammed the Federal Government for issuing threats against South Africa on its investments in the country instead of addressing the questions surrounding the illegal arms procurement deals.