Nigeria unity is negotiable, you are the problem of this country – Afenifere Blast Buhari 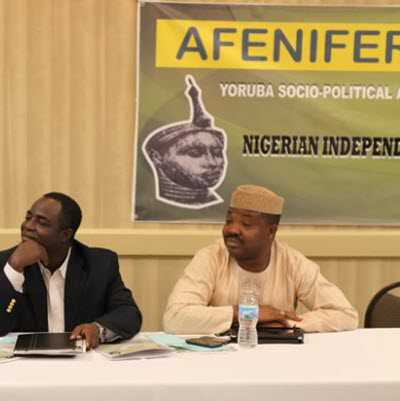 The Afenifere Renewal Group (ARG), a pan-Yoruba group, has reminded President Buhari that he is one of those provoking the many agitations in the country today.
The group also accused the Arewa Youth Consultative Forum (ACF) of ill-advising the president on the issue of restructuring.

The president’s comment that Nigeria’s unity is non-negotiable has continued to raise dust with many citizens condemning the statement.
The Afenifere Renewal Group (ARG) has accused President Muhammadu Buhari and some core northern leaders of provoking further agitations for true federalism or restructuring in the country.

The ARG, a pan-Yoruba group, also condemned the public statement made recently by the Arewa Consultative Forum (ACF) in which it expressed strong support for President Buhari’s position that Nigeria’s unity is non-negotiable.

It said the president’s comments and one-sided appointments was one of the arguments of agitators.
It further warned the Buhari and the ACF not to believe they love Nigeria better than those clamouring for restructuring.

The Ijaw Youth Council (IYC) had earlier slammed the president saying he made a mistake by saying the unity of Nigeria is not negotiable just as Obong Victor Attah, former governor of Akwa Ibom, also said that Nigeria’s unity is negotiable and that President Muhammadu Buhari must work towards it instead of exploiting the south south.

“ARG asserts that neither President Buhari nor ACF loves Nigeria more than those advocating the re-negotiation of what binds us together as a country,” “ARG states unequivocally that the unity of Nigeria is only sustainable by the voluntary acquiescence of components ethnic nationalities.

“In our view, the problem has more to do with President Buhari’s conducts – utterances and perceived lopsided appointments – which appear to portray him as a north-centric president instead of a pan-Nigeria president.
“Both the president and ACF need to take lessons on managing an all inclusive, pan-Nigerian government.

“We wonder what consensus or authority the so-termed non-negotiable unity of Nigeria stands.ciety in a manner that makes every component proud?
“Nigeria was envisioned by its founding fathers as a federal republic, sadly its governance structure as dictated by its constitution is akin to that of a unitary state.

“Hence, the insistence of ACF and by extension the president to keep the provisions of Nigeria’s constitution from being renegotiated is a cause of many unsolvable agitations in the country.
“These agitations can only be managed successfully and sustainably when all Nigerians appreciate that they need one another to bequeath a strong country on the coming generations.

“Yoruba people will never agree to become slaves in their country and the peaceful agitation coming from their space on the restructuring of Nigeria, as against the violent agitations coming from other areas, is to carefully underscore our belief in peaceful change, the mantra under which the last election was won and lost.

“All who wish Nigeria well align with Professor Wole Soyinka’s assertion that Nigeria’s unity is ‘bloody well negotiable and we had better negotiate it…not even at conferences, but every day in our conduct…’
“ARG, therefore, concludes that Nigeria’s unity and mode of governance are negotiable and the earlier we all start working towards this, the better for the development, peace and unity of the country.”