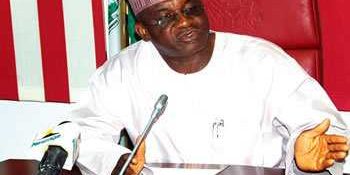 Senate President David Mark yesterday faulted the National Assembly for not carrying out its oversight duties diligently before former Governor of the Central Bank of Nigeria Sanusi Lamido Sanusi, raised the alarm.

Mark spoke during the consideration of the report of the Senate Committee on Finance that investigated the allegation.

The report which has generated controversy, was submitted by the Chairman, Senate Committee on Finance, Senator Ahmed Makarfi  on May 28.

Mark commended the committee for presenting a courageous report based on the facts that were presented to it.

He said the committee was forthright by paying attention to details in the course of investigation.

He lamented that the NNPC did not follow due process by disbursing unappropriated funds for subsidy payments.

He vowed that no matter before the 7th Senate would be swept under the carpet.

Mark said: “At the inception of the 7th Senate, I did say emphatically that there is no issue in this country that we cannot discuss as respected and Distinguished Senators of the Federal Republic of Nigeria.

“If we have the courage to set up a committee, nothing will stop us from taking the report of that committee and nothing will be swept under the carpet in this red chamber.

“I think what is glaringly from this report is that we are all guilty.  If the committees expected to carry out oversight functions on the NNPC were doing their job very well, we wouldn’t have needed the Governor of Central Bank to ring an alarm bell before reacting.

“Whether the alarm is genuine or not, is another matter. The Executive may have good reasons but the legislature obviously do not have reasons not to find out. Let me appeal to the various committees to endeavour to do their work.

“Facts are different from rumours and what we have before us are the facts based on the interview conducted by the committee on public hearing and on all the documents that they could put together.

“One thing is very obvious, due process has not been followed and they have stated so very clearly.”

There was however drama when Senator Sadiq Yar’ Adua moved that the report be stepped down to another legislative day to enable lawmakers study it.

Yar’Adua said: “The report was given to us (Senators) a while ago and I think it is too short a time for us to dissect this report which is 73 pages and which is also containing issues about alleged missing $49.8billion.

“I think it is important for us to go and read the report because actually if you look at the report, I can smell some impeachable offences committed by the President and Commander-in-Chief of the Armed Forces.”

Yar’Adua was overruled by Mark.

Mark said: “For you to just say a report has been presented and it contains impeachable offences is totally unnecessary. That is not the issue here.”

On persistent compliants that most resolutions of the National Assembly were not being implemented by the Executive, Mark said the legislature is to blame.

He said: “We would have to be supported by 2/3 majority. If we have to do so, we have to enact a law that would make our resolutions binding, it is not something that could be done by voice vote.”

He warned the lawmakers not to politicise or jump to conclusions on the alleged missing funds when reconciliations were still ongoing.

“When you say outright it is missing, then you have concluded. The point I am trying to make is that we should not conclude when the process of reconciliation is still ongoing.”

The Senate President warned that it would be fool hardy to remove fuel subsidy without first sensitising the people on the matter.

He said any attempt to do so now would pitch the people against the National Assembly.

He said: I want to appeal that we should not pitch ourselves against the public opinion. If subsidy has to be removed, there must be public enlightenment and education so that facts would be made available to the people and then public opinion at the end of the day will count.

“If  we  sit here now and said remove subsidy,  I think those who are benefitting from subsidy are very powerful and tomorrow they would influence media report and twist it to create an impression that Senate is anti-people.

“If the subsidy has to go, I don’t have problems with that but let us sensitise the people over a very long period of time so that everybody will be carried along and everybody will be on board and then can take a final decision on the issue of subsidy because the recommendations are far reaching.”

Senate in its resolution rejected a recommendation of the Committee that fuel subsidy should be scrapped.

The upper chamber also resolved to fast track the passage of the Petroleum industry Bill (PIB) to ensure proper restructuring and administration of the oil sector.

The Senate also ordered the NNPC to refund $262million to the Federation account with interest.

Senator Ayogu Eze (Enugu North) called for the total removal of subsidy to stem the abuse that has attended it.

He called for the prosecution of those found to have enriched themselves illegally through the proceeds from oil sales.

Senator Ahmed Lawan, described the development of the missing funds as a wake up call for the executive the legislature.

Senator Heineken Lopobiri, described the subsidy regime as a hard nut to crack because it encourages corruption.

He urged the executive to probe the subsidy regime.

He said the report has established that no $49.8billion was missing and that the amount discovered not to have fully reconciled would be taken care of in the forensic audit report still being awaited.

Senator Abdul Ningi said the report of the probe panel demoralised him because of the revelations about how the NNPC expended funds without appropriation.

Ningi disagreed with Senators Eze and Lopobiri, who called for the removal of subsidy on petrol.

He insisted that the removal will make already impoverished Nigerians to suffer.

Senator Smart Adeyemi (Kogi West) said the allegation about the missing funds was made to score cheap political points.

He however admitted that there are glaring abuses in the way and manner the proceeds from oil sales were being managed.

He noted that spending government revenue without appropriation is a breach of the constitution and called for the prosecution of those found to have acted illegally.

Adeyemi said: “On the issue of subsidy, it is the only thing that is left for the country, those who have been accused of abusing the subsidy should be prosecuted because I will not support the subsidy removal.

“At the same time, the nation’s refinery, because those behind the continued non-functional state of the refineries are those who were implementing the subsidy regime, we need to know the names of the directors of companies which are enjoying subsidy.”

The Senate vetoed a recommendation that fuel subsidy be removed.

It approved a resolution that the Nigerian Petroleum Development Company (NPDC) should refund $447million to the federation account being balance of royalty and Petroleum Profit Tax (PPT).

The Senate also ordered the NNPC to refund $262million to the Federation Account being expenses it could not satisfactorily defend in respect of Holding Strategic Stock Reserve; Pipeline Maintenance and Management Cost; and Capital Expenditure.