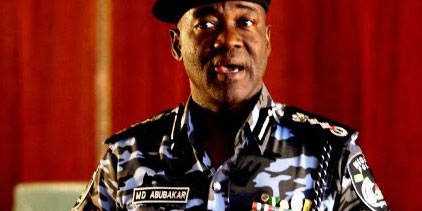 A human rights group named Paths of Peace has accused Nigeria’s Inspector General of Police, Mohammed Abubakar, of defrauding police officers of billions of millions of naira in a dubious investment scam.
In a petition to the Senate, the group demanded that Mr. Abubakar be probed over the alleged multi-billion-naira scheme that reportedly affects every police officer in the country. Paths of Peace (PoP), a non-governmental organization that wrote the petition, stated that its objective was to fight for the rights of the oppressed.

The petition, which was submitted to various Senate Committees, including the Committee on Petition and Privileges and the House Committee on Diaspora, alleged that Mr. Mohammed deducts N11,000 from each police officer’ account each month. The petition stated that the deductions are part of a scam perpetrated through the so-called “mechanized salary section” (MSS). The measure allows police authorities to cut the salaries of officers and to divert the deductions into what is called a mortgage bank called Fokas Savings and Loans Limited.

The petition disclosed that the deductions were purportedly to be used to buy shares for all police officers. However, none of the officers ever received any certificates or documents detailing the ownership of shares or the size of their shares.

PoP’s spokesman, Dandy Eze, stated that the Senate had previously ordered the IG to stop the illegal deductions from officers’ salaries. Mr. Eze disclosed that Mr. Abubakar had not heeded the Senate’s order.

According to the petition, the IG never refunded the deducted funds to police officers. The petition also accused Mr. Abubakar of flouting the legislature’s order by continuing to make further deductions from police officers’ accounts.

PoP urged the Senate to intervene and to prevail on the Inspector General to stop making any more deductions and also to refund what he had so far deducted from police officers’ accounts.