Nigeria must Break this year ::-:: Boko Haram in 130 villages, towns 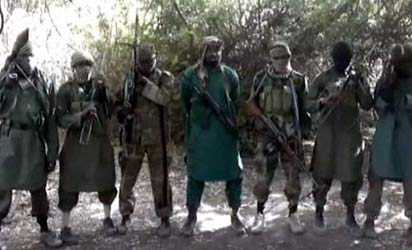 It claimed that 1,200 civilians were killed last year in the crises between nomadic pastoralists and farming communities in some states in the North-Central.

These disclosures were contained in the HRW World Report 2015, which was released to the media.

The report said: “In April, Boko Haram’s abduction of nearly 300 schoolgirls in the town of Chibok focused unprecedented global attention on the group’s abduction of women and girls.

“It continues to seize and control territory in Borno, Yobe, and Adamawa states, where it holds more than 130 villages and towns. In responding to the group, government security forces have been implicated in grave violations of human rights and international humanitarian law. An estimated 3,750 civilians were killed by Boko Haram attacks in 2014.

“The conflict has resulted in the deaths of thousands of civilians and the displacement of 981, 416 residents within Nigeria as well as more than 150,000 people who have become refugees in neighboring countries.”

The HRW faulted the military for not investigating alleged killing of 600 detainees who fled during the attack on Giwa Military Barracks in Maiduguri.

“During a Boko Haram attack in March on the Giwa Military Barracks and detention facility in Maiduguri, security forces allegedly killed more than 600 detainees who fled during the attack.”No member of the security forces has been brought to justice for these and previous violations of human rights, including the massive deaths and destruction of property from a military raid in Baga, Borno State in April 2013. Despite repeated pledges by the military, these incidents are yet to be investigated.

“Government security forces have responded to the Boko Haram violence in a heavy-handed way, leading to serious human rights violations.

“ Suspects are routinely abused, tortured, and held incommunicado in abusive detention conditions without charge or trial.

“Local vigilante groups assisting Nigerian security forces were allegedly implicated in the recruitment and use of child soldiers, and ill-treatment, and unlawful killing of Boko Haram suspects.”

The report said more than 1,200 people were killed in the clashes between nomadic pastoralists and farming communities in some states in the North-Central in 2014.

The report added: “In the North Central states of Nigeria, communal violence, fuelled by competition for power and access to land between nomadic pastoralists and farming communities, killed more than 1,200 people in 2014.

“Nigerian authorities made scant effort to investigate or prosecute those responsible for the violence.”

The Nigeria researcher at Human Rights Watch, Mausi Segun, said: “With elections around the corner, citizens should ensure that Nigeria’s human rights challenges are at the centre of the political discourse.

“Unmitigated violence is a threat to the nation’s stability and to the well-being of all Nigerians, not just those in the North.”

“Nigerians should be putting pressure on their government in this election season to halt the endemic violence.

”Nigeria’s leaders should be as focused on the rights of all residents as they are on winning the battles of party politics.”