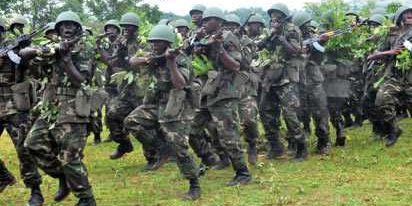 Military officers and men were placed on red alert yesterday — no thanks to the increasingly daring moves of the deadly Boko Haram sect.

Fears of likely infiltration or inducement of officers and men have made the military hierarchy to recall those on leave, The Nation learnt.

Besides, the military has placed restrictions on Facebook networking by officers and other ranks. Military personnel have also been stopped from taking annual leave or travelling out of their official postings. All those who were earlier granted leave of absence have been ordered back to their duty posts. The directive may have caused apprehension in the system, but a source said it was nothing to worry about.

Another source said placing all units and commands on the red alert was to eradicate “threats in the system”.

A “red alert” is issued when there are reasons to believe there will be a major security risk.

Besides, newspapers had their distribution disrupted, following fears that their vans were to be used to carry explosives – an action that cost the companies huge losses.

In line with global military practice, officers and men have been cautioned to separate their personalities from official calling on Facebook.

The military opted for these measures as part of the ongoing “re-strategising plan” against the insurgents, who are trying to extend their operation areas beyond the Northeast.

A military source said: “The security challenges in the country require a state of alertness on the part of officers and men in the Armed Forces. This is why everyone has been placed on what I may describe as ‘red alert’.

“We are at a stage in the fight against insurgents that we cannot take things for granted. It is just a way of re-strategising.

“Do not forget that if all options fail, we may move heavily against the insurgents and make the battle a decisive one. But, the military is looking forward to options being explored by the government.

“So, the alertness is to ensure that all officers and men are within reach and accessible in case of any task.”

On the recall of officers and men from leave, the source added: “We want everyone restricted to his or her duty post and barracks to avert infiltration by the insurgents.

“Some of these insurgents have been trying to induce military men but they have never succeeded. We need to be proactive.

“Do not forget several attempts made by the insurgents to strike in some military/ police barracks and formations in Abuja, Jaji, Bama, Maiduguri, Gombe, and other places.

“After screening of all these places and beefing up security, the next stage is to prevent officers and men from inducement by these insurgents.”

The source said: “It has nothing to do with any other speculation you may be thinking of. All over the world, access to military formations and conduct of officers and men are determined by security trends.

“There is a signal ordering all officers and men not to associate their activities on the Facebook with their official position.

“Those breaching security use the internet a lot, we cannot expose our officers and men to grave risks. As we track those threatening security of the nation, they are also surfing the net to know much about us and our personnel. Our officers and men can be on Facebook but without reference to their military positions or postings or assignments.

“This is a policy even in the United States and most advanced countries. Ours is a sensitive service; it is also regimented. There are certain things that are strictly controlled within military ethics.

“This challenging period calls for proactive measures from military officers and men.”