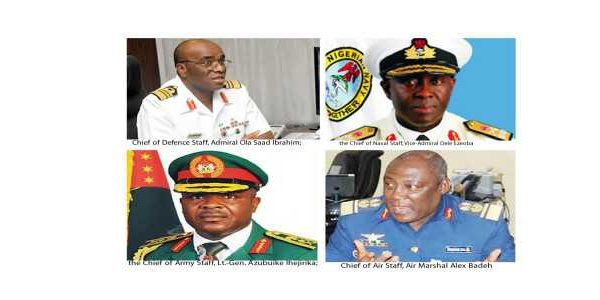 A Federal High Court sitting in Abuja yesterday nullified the appointments of the nation’s security chiefs. Those affected by the judgement are the Chief of Defence Staff, Admiral Ola Saad Ibrahim; the Chief of Army Staff, Lt.-Gen. Azu-buike Ihejirika; Chief of Air Staff, Air Marshal Alex Badeh and the Chief of Naval Staff, Vice-Admiral Dele Ezeoba.

The court held that their appointment by President Goodluck Jonathan without the consent of the Senate was illegal, unconstitutional, null and void. In law, when an act is nullified as in the present case, it implies that the act, like the appointment of the service chiefs, can be treated as nothing, as if it did not exist or never happened. Incidentally, their appointments were nullified yesterday while they were holding a crucial meeting with President Jonathan on the security situation in the country.

The judge, Justice Adamu Bello, which frowned at the breach of the 1999 Constitution (as amended) also issued a separate order restraining “the President from further appointing service chiefs without first obtaining the confirmation of the National Assembly.”

He gave the verdict yesterday while delivering judgement on a five-yearold suit instituted by Lagos lawyer, Mr. Festus Keyamo. Keyamo had dragged the administration of the late President Umaru Yar’Adua before the Abuja Federal High Court for failing to get the consent of the Senate before appointing the service chiefs.

Yar’Adua had inherited the illegality from his predecessor. President Jonathan had also towed their path when he was elected to office.

The suit, which specifically faulted the practice, was, however, not regimespecific and time bound. By implication, all such appointments made before now without the confirmation of the National Assembly were affected by yesterday’s verdict of the court.

Keyamo had argued that the practice of sidestepping the constitutional requirement of getting the consent of the National Assembly in the appointment of service chiefs was unconstitutional. He said he was worried because the provisions of the organic law of the land were being breached with impunity.

Keyamo had in the suit marked: FHC/ABJ/ CS/611/2008 sought a determination of the following questions:

* Whether by the combined interpretation of the provisions of Section 218 of the Constitution of the Federal Republic of Nigeria, 1999 and Section 18 of the Armed Forces Act, Cap. A.20, Laws of the Federation of Nigeria, 2004, the President can appoint the service chiefs of the federation without the confirmation of the National Assembly first sought and obtained.

He also sought the following orders:

*A declaration that the appointment of service chiefs for the Federal Republic of Nigeria by the President, without the confirmation of the National Assembly is illegal, unconstitutional and void.

*A declaration that Section 18 (1) & (2) of the Armed Forces Act, Cap. A.20, Laws of the Federation of Nigeria, 2004, is in conformity with the provisions of the 1999 Constitution so as not to fall within the category of existing laws under Section 315 (2) – of the Constitution of the Federal Republic of Nigeria, 1999, that the President, may, by order, modify its text, to bring it into conformity with the provisions of the Constitution.

*An order restraining the President from further appointing service chiefs for the federation without first obtaining the confirmation of the National Assembly. Parties to the suit had filed written briefs on the legal issues raised and adopted same.

In a judgement yesterday, Justice Bello upheld Keyamo’s arguments and determined all the questions in his favour even as he granted him the two declaratory and one of the injunctive reliefs sought.

The President had on June 4 formally approved the proscription of Boko Haram and authorised the gazetting of an order declaring the group’s activities illegal and acts of terrorism.

At the National Economic Council, NEC, meeting last Thursday, the council, after an extensive discussion on the persisting problem of crude oil theft and its negative effect on the revenue from the sector, set up a committee to assess the challenge and draw up a roadmap to guide further actions that would be taken by NEC towards finding a lasting solution to the problem.