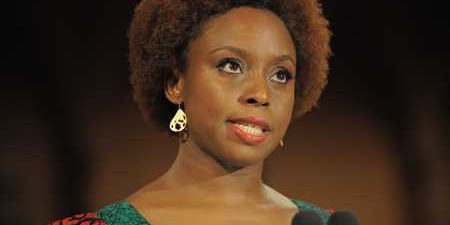 intervention against Boko Haram, the rebel group that recently kidnapped and holding captive, more than 200 girls.

She said while Boko Haram’s actions had forced members of her own family to flee the area, a foreign attack on her homeland would be counterproductive. “Now we have American drones helping us in this forest and even the French have sent in people – shouldn’t they be fixing their own economy?” she said.

“We can solve our own damn problems,” she added.

At the same time Adichie, speaking at the Hay Festival, welcomed the social media campaign Bring Back Our Girls that has drawn the support of many in the US, including Michelle Obama. She pointed out that the Twitter hashtag #bringbackourgirls was started in Nigeria and not, as has been claimed, in America. “It was very much a grassroots social media Nigerian campaign. The fact that westerners are sharing in something started locally is fine with me.

“I recognise that the campaign made a difference. People paid attention and then the [Nigerian] government had to sit up a little bit.”

Adichie argued that local knowledge would be more useful in finding the girls than US drones. “I’m sure that there are hunters in that area who know that forest very well. Why haven’t they been used? Why aren’t we depending on them?

“What we need is a better equipped military, a better trained military: we don’t need Americans to send people in.” Stopping herself at this point, she joked: “This is my Nigerian nationalist rant”.

Adichie was speaking about her latest novel Americanah, which explores the experience of two Nigerian immigrants – one in America and one in Britain. The author, who grew up in Nigeria, said that when she moved to the country to study she adopted an American accent to try to fit in better. “When I went to the US, I remember feeling a sense of dislocation. It was ostensibly an English-speaking country, but I couldn’t understand what people were saying.”

After an American lady in the audience asked a question, Adichie assured her that she could only tease the country because she had so much affection for the place. “It’s like a rich uncle who doesn’t remember my name but gives me pocket money,” she said to audience laughter.