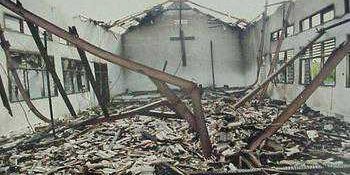 The Catholic Church in Benue says 70 of its Churches have been destroyed in the crises that rocked Benue in the past few months. Rev. Felix Apine, Coordinator, Justice Development and Peace Commission (JDPC), an outreach arm of the Church, told the News Agency of Nigeria (NAN) in Makurdi that the destroyed Churches were outreach arms of the Diocese.

“Thirty Churches, mostly outreach stations in Gwer West Local Government were either burnt or completely destroyed, while the parishioners had fled to other villages for safety. “The remaining 40 are in Guma Local Government Area,’’ he said. The cleric said that primary and secondary schools belonging to the Diocese in the affected areas had also been destroyed.

The Secretary to the Catholic Bishop of Makurdi Diocese, Rev. Fr. Moses Mbachie, who also spoke to NAN, confirmed that “more than 70 Churches” had been destroyed and described the situation as “very sad’’. The Director, Information and Communication of the Diocese, Rev. Dr Moses Iorapuu, also spoke on the issue and said that the development was indeed saddening.

“The situation is very bad; in fact, you can go to the affected parishes to physically ascertain the damage yourself,’’ he said. Archbishop Yiman Orkwar, Benue Chairman of the Christian Association of Nigeria (CAN), who also confirmed the destruction of Churches and schools, however, said that CAN was still taking inventory of the total number of Churches destroyed.

Reacting to the claims, Mr Daniel Ezeala, Public Relations Officer, Benue Police Command said that the command was not aware of such destruction. Ezeala told NAN that the command had not been informed of such destruction and alleged that people were just coming up with “all kinds of speculations about things that never happened.” NAN reports that the state had been turned into a theatre of various types of crises allegedly between herdsmen and Tiv farmers mostly in the hinterlands.