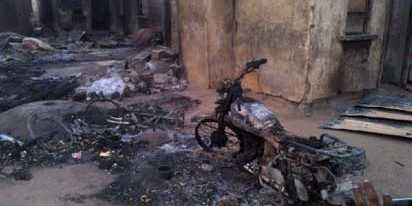 Maiduguri — Gunmen suspected to be members of  deadly Boko Haram terrorists, yesterday, evening invaded the residence  of the Commander, Joint Task Force (JTF), Niger Delta, Major General  Tukur Buratai at his country home, Buratai District in Biu Local  Government Area of Borno State, killing two persons including a security  personnel on guard suspected to be a soldier, and injured others.
Although, according to a locale of Buratai, Musa Abubakar said, the  other person killed was a Chadian nationale (name withheld) who was  doing construction work at one of the houses owned by the Army General,  before they set ablaze another family house where the father of General  Buratai, Alhaji Yusuf Buratai resided.
Abubakar stated that the gunmen also set ablaze a primary school in  Buratai before they fled into the bush, but did not touch nor injure  other neighbouring residents.
This is even as another group of terrorists invaded Bama Council Area  of the state,Tuesday evening, which caused heavy exchange of gunfire  between them and the security operatives, a situation that led to the  killing of several people and burning of houses, shops and vehicles on  the main road and other streets in the town.
The Bama incident is coming barely few hours when Governor Kashim  Shettima with his convoy passed through the town at about 8p.m., Tuesday  from his way to Maiduguri where he had gone to Madagali, the  headquarters of Gulak Local Government Area of Adamawa State to  sympathise with the victims of Izghe who are now taking refuge at the  council. The attacks claimed over 150 lives, weekend.
Some residents of Bama told our correspondent that the gunmen invaded  the town at about 4a.m., Wednesday with Hilux vehicles, Improvised  Explosive Devices, IEDs, petrol bombs and started shooting sporadically  before the security operatives engaged them in a shoot-out.
The gunmen, according to a source, “equally succeeded in torching  some portions of a house belonging to one of the highly placed  traditional rulers (name withheld) in the town.”
According to an eye-witness, Baba Bulama, the gunmen came in various  vehicles with IEDs, and petrol-bombs at the dawn prayers; and started  shooting sporadically at houses, while chanting, ‘God is great’ in  Arabic language for over six hours, before the soldiers rushed to the  scene.
He said the insurgents, numbering about 150 continued to attack and  shoot at any houses right from the Shehu’s palace down to the motor-park  in which no less than 15 vehicles were set ablaze, including the  market, adjacent to the park.