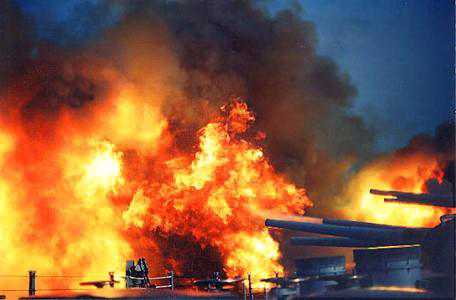 A group of freedom fighters in the southern part of Nigeria “The Niger Delta Avengers” have yet again blow up another major NNPC and Chevron oil wells and trunk lines in Warri area of Delta State.

The group via its twitter page tweeted about the attack over the weekend congratulating their strike team hence, sending warning to individuals or companies planning to repair destroyed facilities, in an operation “Red Economy” launched against the corrupt Nigerian Government who have been sucking crude oil from the region since it was first discovered in 1958 till date and have left the community hopes shattered with lives and properties at maximum risk, rivers and farmlands polluted with massive oil spillage.

The avengers have taken it upon themselves to fight for the people so their voices will be heard, knowing that violence is the only language these corrupt politicians understands, they have taken up arms to defend the land and fight for the people, they have vowed to cripple the economy of Nigeria to zero level until their demands met. they have reportedly sent their list of demands to the federal government and one of them is the release of the detained IPOB leader Dr Nnamdi Kanu and other political prisoners held across the country.

Buhari and his government had vowed to crush the group with every military might but later withdrew the army from the region after the group threatened to launch a missile targeting government offices and administrations, Mr Buhari was rumoured to have allegedly cancelled his planned trip to the region and flew out of the country a day before the proposed missile launch date, many have criticised the move and called the president a coward who could leave his office as president and ran out of the country in face of a crisis of this magnitude, the president denied the allegation saying he flew out to the United Kingdom for an emergency health problem, which has raised a serious question, Are the Nigerian doctors incompetent enough to treat the president?

the group last week after the Brexit vote urged the president to borrow a leaf from British prime minister David Cameron and call for a referendum in the country for the people to decide their fate, saying self-determination is a fundamental right of a people.