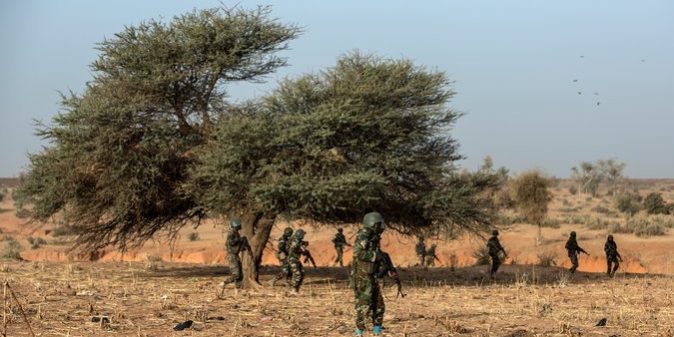 NIAMEY, Niger — More than six months ago, a group of American soldiers rushed to reach a spot in the scrubland of Niger after intelligence officials intercepted a signal from the cellphone of a terrorist known as Doundoun Cheffou. He wasn’t there, but hours later four of the Americans were killed in an ambush that remains under investigation.

This month, Nigerien forces apprehended a man who matches the description of Mr. Cheffou, a senior lieutenant of a former affiliate of Al Qaeda that pledged allegiance to the Islamic State. The Nigerien authorities are working to verify his identity, said a senior Nigerien commander, an account that was confirmed by a retired American counterterrorism official.

In an interview on Friday at a Nigerien base outside the city of Agadez, where the United States is building a new drone base, Col. Maj. Moussa Salaou Barmou, the head of the Nigerien Special Forces, said the man suspected of being Mr. Cheffou was seized during an army patrol two weeks ago in the Tillaberi region near the Mali border.

The man has been turned over to a special counterterrorism police unit in the country’s capital, Niamey, where agents are working to identify him.

“They are the ones still conducting the investigation and trying to identify this guy,” said Colonel Major Barmou, a 29-year army veteran who trained at Fort Benning, Ga., and the National Defense University in Washington.

Army forces acting on a tip rounded up several men suspected of being fighters from the militant group, known as the Islamic State of the Greater Sahara, he said.

“We have been following those guys for quite a while now,” Colonel Major Barmou said. “We know the general area where he goes. Somebody told us he was in this area, and probably you should conduct a patrol and get him.”

The United States ambassador to Niger, Eric P. Whitaker, said in an interview on Monday that Nigerien officials had told him and American military officers and law enforcement officials about the capture, and that American officials were waiting to get more information from the Nigerien authorities.

“It is still under investigation,” said Mr. Whitaker, who then held up both hands with his fingers crossed to indicate his hopes that the suspect is confirmed to be Mr. Cheffou.

The troubled district of Tillaberi sits at Niger’s border with Mali, a lawless area where the central government has struggled to assert control.

Herders from the Peul ethnic group have long complained of losing their cattle to armed bandits. In recent years, the ISIS affiliate has recruited heavily from the region, arming Peul men in return for their participation in jihad.

Corinne Dufka, the Sahel director for Human Rights Watch, said the militants had won over the local population by addressing longstanding grievances.

Villagers Ms. Dufka interviewed across the border in Mali described how the group’s leader gave out soccer balls to Peul youth. They described him as a “savior” and said the jihadists had stepped into the security vacuum and given the community the ability to protect itself.

Mr. Cheffou, a onetime cattle herder, is believed to be the terrorist group’s senior commander in the region, where there have been at least 46 attacks since 2016.

He was being tracked by American intelligence agencies both because of his seniority in the group and because he is suspected of having played a role in the kidnapping of an American aid worker, Jeffery Woodke, according to Rudy Atallah, the former director of African counterterrorism policy for the Pentagon.

On the night of Oct. 3, a cellphone believed to be associated with Mr. Cheffou lit up in a distant spot in the desert at the Mali-Niger border. The intercepted signal led American officials to scramble together a raid. They first tried to send a Special Forces unit from a base in the northern Nigerien outpost of Arlit, but their mission was scotched because of bad weather or mechanical problems with their helicopter.

It was then that officials decided to reroute a unit of American and Nigerien forces, who were conducting a routine, low-risk patrol in the area, though they were not properly equipped for the mission.

After the nighttime raid, when they did not find Mr. Cheffou, the soldiers returned through the village of Tongo Tongo, where the ambush took place.

Survivors of the ambush described how the village chief of Tongo Tongo had come out to greet the troops and then began making a series of requests — for medicine, for food — that appeared to be an attempt to delay them. He was later arrested, and in his cellphone investigators discovered phone numbers associated with Mr. Cheffou, according to Nigerien officials.

“We’ve adjusted the level with which they’re approved,” Maj. Gen. J. Marcus Hicks, the head of American Special Operations forces in Africa, said in an interview, declining to give more specific details. “We’ve been very deliberate about ensuring that communication is absolutely seamless at every level.”

General Hicks, speaking on the sidelines of a counterterrorism training exercise in Niamey, also confirmed earlier reports that Special Operations forces had reduced the number of missions in which American advisers accompany African troops on risky operations against insurgent groups. Senior commanders now send out commandos only on missions with local forces that “will have the greatest strategic impact,” he said.

Otherwise, they will increasingly stay closer to the rear, working from command centers to help African officers grapple with intelligence, logistics, artillery and other aspects of big operations that are important but not as flashy as front-line combat against a range of groups aligned with Al Qaeda or the Islamic State.

Among the report’s preliminary findings: The leader of the ill-fated team of American soldiers in Niger last fall warned before the mission that his troops did not have the equipment or intelligence necessary to carry out the kill-or-capture raid against the militant leader, The New York Times reported last month.