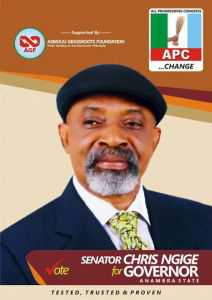 has rejected the result and decided to head for the Election Tribunal.

Ngige is placing a distant third behind Chief Willie Obiano of the All Progressives Grand Alliance (APGA) and Comrade Tony Nwoye of the Peoples Democratic Party (PDP) but is expected to leap to the second position after today’s rescheduled election in 65 units of Obosi Ward 7, Idemili North LGA, which is regarded as part of his stronghold but where voting had to be postponed due to late arrival of materials.

News Express had earlier reported Anambra State Governor, Mr. Peter Obi, as appealing to Senator Ngige to accept the result in good faith and support the winner in the overall interest of the state.

Ngige has, however, rejected the advice. “APC candidate Senator Chris Ngige rejected the result of Anambra Governorship election and (has decided to) head to Tribunal,” Law Mefor, a member of his campaign team, announced on Facebook. He promised to soon provide details for the decision.