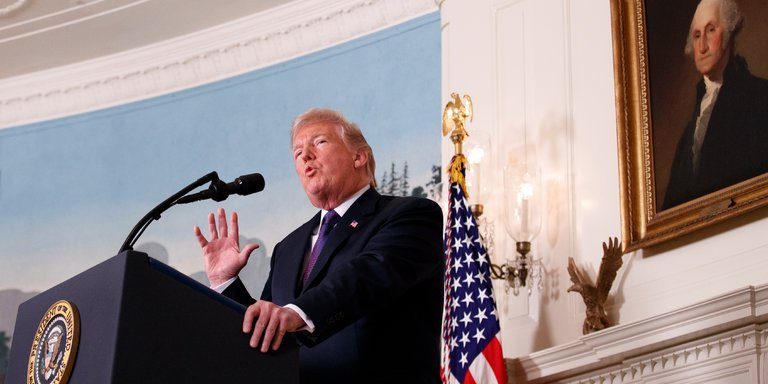 ‘Mission Accomplished!’ But What Is the Mission in Syria?

WASHINGTON — On the morning after, President Trump declared success. The surgical strike against chemical weapons facilities in Syria had been executed perfectly, he said on Saturday. “Mission Accomplished!” he wrote on Twitter.

That’s a phrase presidents and politicians have studiously avoided since President George W. Bush’s ill-fated aircraft carrier visit prematurely declaring success in the Iraq war. But aside from the curious choice of words, it raised the essential question regarding Syria going beyond the one-time strike: What exactly is the mission?

For most of Mr. Trump’s presidency, it has been to defeat the Islamic State and then get out. But what Mr. Trump outlined in his televised speech to the nation on Friday night was something more complicated. He promised a sustained campaign to stop Syria’s government from again using chemical weapons on its own people, while also emphasizing the limits of America’s ability or willingness to do more to stop the broader bloodletting that has devastated that country for seven years.

Mr. Trump finds himself in a position not all that different from that of his predecessor, President Barack Obama, and with no easier answers. The strike brought home Mr. Trump’s competing impulses when it comes to Syria — on the one hand, his manful chest-thumping intended to demonstrate that he is the toughest one on the international block, and on the other, his deep conviction that American involvement in the Middle East since the attacks of Sept. 11, 2001, has been a waste of blood and treasure.

He did little to reconcile those impulses with his retaliatory strike to punish the government of President Bashar al-Assad for a suspected chemical attack a week ago that killed dozens of people. But then again, he reflected the contradictions of an American public that is tired of trying to solve other people’s problems in the Middle East yet recoils at the haunting images of dead children choked by gas.

Veterans of Washington policymaking in the Middle East offered conditional praise for Mr. Trump’s restrained approach to the strike, if not necessarily his more bellicose rhetoric. In hitting three sites associated with Mr. Assad’s chemical weapons capabilities, limiting it to a single night and conducting it in conjunction with Britain and France, they said it sent a message while avoiding a deeper involvement and minimizing the risk of provoking Syria’s patrons, Russia and Iran, into retaliating themselves.

“However, I don’t think the strike clarifies U.S. policy,” said Meghan O’Sullivan, who oversaw the Iraq war as Mr. Bush’s deputy national security adviser. “In theory, there is not necessarily an inconsistency between a targeted, multilateral strike against chemical weapons sites and the withdrawal of troops that have been fighting ISIS. But the strike does really call into question the wisdom of pulling back American forces now in highlighting the question of what our objective really is in Syria.”

Others argued that the strike was a waste that accomplished little and, in the process, exceeded the president’s authority as commander in chief since he did not obtain authorization from Congress first. Critics said that if Mr. Trump was truly moved by humanitarian concern over the victims of last weekend’s attack, he should reverse his policy of barring virtually any new Syrian refugees from the United States.

“The ongoing bloodshed and war crimes in Syria are a stark reminder that Syrian civilians need our support now more than ever,” Noah Gottschalk of Oxfam America said in a statement. “Yet the Trump administration still lacks a coherent strategy to actually bring an end to the conflict and instead has sought to slash humanitarian aid and slam the door on Syrian refugees.”

By most accounts, the strike essentially left in place the status quo on the ground. It did little if anything to weaken Mr. Assad beyond any chemical weapons stores it destroyed, leaving him to continue waging war on his own people through conventional means. It did nothing to exact the “big price” Mr. Trump promised to impose on Russia and Iran for enabling Mr. Assad’s chemical attacks.

Indeed, Mr. Trump has shown little interest in trying to steer Syria to a resolution of its civil war, eschewing the sort of Geneva diplomacy that absorbed Mr. Obama’s last secretary of state, John F. Kerry, to little apparent effect. Mr. Trump sees Syria in two boxes — the fight against the Islamic State, in which he has declared near victory, and the multisided civil war that he wants no part of, saying as he did just days ago, “Let the other people take care of it now.”

But that is an artificial bifurcation in a country torn by violence on all sides. The civil war affects the ability of the Islamic State to operate and vice versa. Mr. Trump may have opted for the more cautious approach urged by Defense Secretary Jim Mattis instead of a more crippling attack that may have been favored by his new national security adviser, John R. Bolton, but he did not settle the larger question.

Asked on Friday before the missiles began flying to explain America’s strategy in Syria, Heather Nauert, the State Department spokeswoman, demurred. “I’m not going to get ahead of the president,” she said.

Even when the president spoke later that night, he was somewhat vague in describing his own strategy. While he said he was “prepared to sustain this response until the Syrian regime stops its use of prohibited chemical agents,” he did not explain what he meant or how far he was willing to go beyond saying he would also use economic and diplomatic tools.

Colin H. Kahl, who was the national security adviser to former Vice President Joseph R. Biden Jr., said Mr. Trump “wisely avoided hitting regime targets where there was a significant risk of killing Russians” but for that very reason did little real harm to Mr. Assad.

“Indeed, the relatively cautious nature of the strike signaled that we were deterred from taking larger action, potentially undercutting the credible U.S. threat of doing more down the line if the regime continues to use chemical weapons,” he said.

Fundamentally, these factors are not that different than they were during Mr. Obama’s presidency, but Mr. Trump often seems unaware of history, even recent history. His use of the phrase “mission accomplished” on Saturday, for example, invited unwelcome comparisons to Mr. Bush’s experience.

Mr. Bush appeared on the aircraft carrier Abraham Lincoln in May 2003 after American troops toppled Saddam Hussein in Iraq and declared the end of major combat operations. Behind him was a large banner declaring “Mission Accomplished,” which White House aides later said was meant as a congratulations to the carrier crew returning home but became a metaphor for miscalculation as a virulent insurgency consumed Iraq.

“Um…I would have recommended ending this tweet with not those two words,” Ari Fleischer, who was Mr. Bush’s White House press secretary at the time, wrote on Twitter on Saturday. When Mr. Bush made his appearance in spring 2003, he said, the words seemed fitting. “By the Fall,” he added, “the shot of Bush with the banner became a symbol of what went wrong.”

Philip H. Gordon, who was Mr. Obama’s White House coordinator of Middle East policy, said one of the challenges for Mr. Trump was calibrating his language with his actions. In effect, Mr. Gordon said, the president seemed to be trying to find a reasoned middle ground in Syria that belies his own tough talk.

“You can make a case that we are trying to thread a needle that’s tough to thread, but the needle is to do enough to deter the regime from using chemical weapons but not so much that sucks us into the Syrian civil war and gets us into conflict with Iran and Russia,” he said.

Rather than pay attention to Mr. Trump’s words, Mr. Gordon said the strategy was better articulated by Prime Minister Theresa May of Britain and Mr. Mattis, who described the strike as an effort to stop Mr. Assad from using chemical weapons but noted that it was not intended to achieve broader goals.

“What May and Mattis said could be considered a legitimate strategy,” Mr. Gordon said. “The risk is, with this president and this administration, is he going to be disciplined enough and restrained enough to thread that needle? Those are not his fortes.”

A version of this news analysis appears in print on April 15, 2018, on Page A1 of the New York edition with the headline: ‘Mission Accomplished!’ But What Is the Mission in Syria?. Order Reprints| Today's Paper|Subscribe