News Analysis: Hamas Sees Gaza Protests as Peaceful — and as a ‘Deadly Weapon’ 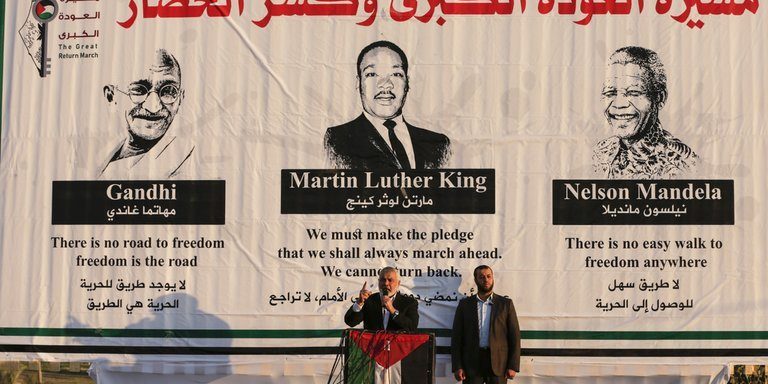 Hamas Sees Gaza Protests as Peaceful — and as a ‘Deadly Weapon’

GAZA CITY — It was a striking tableau: Ismail Haniya, the political leader of Hamas, the Islamic militant group that has tried suicide bombs, rockets and attack tunnels in its long struggle with Israel, standing before portraits of the giants of nonviolent resistance — Mahatma Gandhi, Martin Luther King Jr. and Nelson Mandela.

Urging on Palestinians who have staged a new campaign of protests along the fence separating Gaza from Israel, Mr. Haniya likened their struggle to those for India’s independence, against racial segregation and discrimination in the United States, and against apartheid in South Africa.

“This blessed protest is national, peaceful, popular and civilized,” he said.

Minutes later, though, he called the same protests “a deadly weapon” with which to achieve the Palestinians’ goals, saying that guns, rockets and attack tunnels — the more familiar weapons that have kept Hamas listed as a terrorist group by the United States, European Union and Israel — remained at hand if needed.

Mixed messages have abounded during the so-called Great Return March, the grass-roots campaign that is now in its third week and seeks to highlight hardship in Gaza and demand the right to return to lands in Israel. While organizers promised peaceful disobedience of Israel’s orders to stay far from the fence, participants have thrown Molotov cocktails and other explosives, even attaching one to a kite.

And while Mr. Haniya and other Gaza leaders espoused Palestinian unity, and flew only the national flag, he also, without naming them, accused the Ramallah-based Palestinian Authority and its president, Mahmoud Abbas, leader of archrival Fatah, of presiding over a corrupt era of “humiliation, negotiations and security coordination” with Israel.

Few analysts, and certainly few Israelis, have suggested that Hamas may actually be rethinking its strategy merely because it has joined what are meant to be nonviolent mass protests and has name-checked the heroes of peaceful civil disobedience.

“It’s quite understandable that when those that proscribe Hamas as a terror organization see Haniya surrounded by icons of peace, it does little to dispel memories of very violent and bloody attacks, including by suicide bombs,” said Beverley Milton-Edwards, an expert on political Islam at the Brookings Doha Center in Qatar who was a co-author of a history of Hamas.

But if Mr. Haniya’s unexpected nod to nonviolence struck some as contradictory and self-serving — as evidence of, one might say, a degree of chutzpah — his organization’s embrace of the Gaza protests had a clear logic that can be understood in much simpler terms.

Its experiment with popular resistance may or may not be wholehearted, but it is indisputably pragmatic.

A month or two ago, Hamas was cornered. Isolated regionally, rived by internal disputes, it had been unable to ameliorate a deepening humanitarian crisis in Gaza and was increasingly humiliated by the failure of reconciliation talks with Ramallah.

“They had to make too many concessions in the hope of getting a little bit in exchange, and they wound up getting nothing whatsoever,” said Azzam Tamimi, an analyst for a London-based Arabic television channel with close ties to top Hamas leadership.

After a decade running Gaza, and hemmed in by an Israeli-Egyptian blockade, Hamas was growing deeply unpopular.

“Though most Gazans would blame Israel fundamentally, and Egypt indirectly, a lot of Palestinians would just do away with all of Hamas to have a better life,” said Tareq Baconi, author of “Hamas Contained: The Rise and Pacification of Palestinian Resistance,” to be published next month by Stanford University Press.

The group was in such dire straits that analysts and Israeli security officials warned it might provoke a new war out of sheer desperation to shake things up.

Yet, even the prospect of war seemed unavailing. Neither Hamas nor Gaza’s two million residents, still recovering from the past two conflicts, in 2012 and 2014, had any appetite for another round of violence.

To its rockets Israel had responded with the Iron Dome antimissile system. To its tunnels Israel was answering with a $2 billion reinforced-concrete wall buried deep underground. And on Sunday, Israel said it had uncovered and destroyed the longest operational tunnel yet from Gaza.

It was no surprise, then, that after a grass-roots idea for a peaceful, long-lasting protest along the Gaza fence started gaining widespread support, Hamas brought a halt to what had been a fairly steady tempo of rocket launches into Israel and threw its considerable organizational might behind the demonstrations.

By embracing the protests, Hamas cannily aligned itself with a popular movement that became even more popular as it took shape — and that generated an outpouring of international support when Israel responded with gunfire, killing dozens of Palestinians, almost all of them unarmed.

Instantly, the woebegone Palestinian cause and the crisis in Gaza were back in the news, and even the demand for a right of return to Israeli land — one that many supporters of a two-state solution seemed ready to throw overboard — was being taken seriously, cheering Palestinians in refugee camps and the diaspora.

The time was ripe for a popular movement in Gaza, where younger Palestinians, like those on the West Bank and in East Jerusalem, have grown disillusioned with the moribund Oslo peace process for self-governance, Mr. Baconi said. Many want to turn the national movement into a campaign for civil rights, rather than simply for statehood.

“Hamas is just jumping on the bandwagon and recognizing the effectiveness of popular resistance at this moment,” he said.

Yet, not all Gazans see Hamas’s involvement in the new protests as laudable. Some accused the group of cynically hijacking the demonstrations to serve its own purposes, while still also using young men as cannon fodder.

“It’s beautiful that we find Hamas adopting this nonviolent struggle,” Mohammad Al Taluli, a 26-year-old activist due in court this week on criminal charges for criticizing Hamas online, said sarcastically. “One week before the peaceful protest there was a military maneuver for the Qassam brigades. Do they think they fool us?”

“The gun is no longer a choice,” Mr. Al Taluli added. “It’s a burden on anybody who carries it.”

Yohanan Tzoreff, a former adviser for Arab affairs in Israel’s civil administration in Gaza, viewed the protests through the lens of Hamas’s long-running political rivalry with Fatah, in which Hamas hopes eventually to seize control of the Palestine Liberation Organization, over which Mr. Abbas now maintains a tight grip.

For the moment, the two groups are enjoying an uneasy public truce, with Mr. Abbas expressing solidarity with the Gaza protests.

“Fatah publicly support the protests, but behind closed doors, they criticize them as nothing more than a Hamas stunt,” Ms. Milton-Edwards said.

For Hamas, the fate of its new embrace of popular protest depends on the ability of its leaders, and the Gaza marchers, to walk a fine line along the fence with Israel.

Too much in the way of stone- or firebomb-throwing could spark another heavy-handed Israeli response — and the kind of Palestinian blood bath that could compel Hamas to answer back with rockets.

“The more Israel uses disproportionate force, the harder it is for Hamas to continue holding back from retaliating,” Mr. Baconi said. “At some point, Hamas will start to lose legitimacy if it doesn’t.”