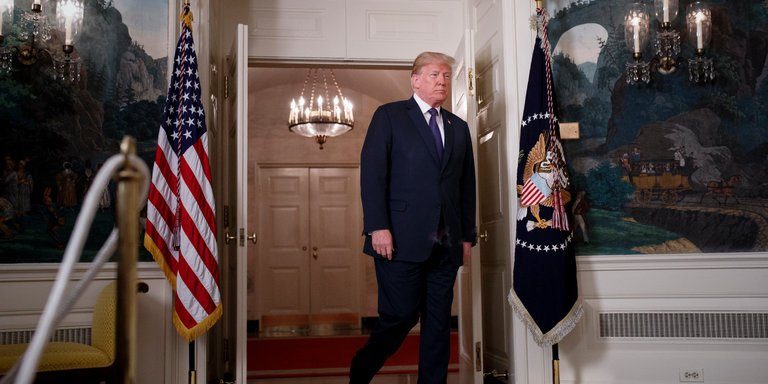 From One Attack in Syria, a World of Potential Risks

BEIRUT, Lebanon — For the second time in just over a year, President Trump, in sending missiles crashing into Syrian military targets, added American firepower to one of the most complex and multisided conflicts in a generation.

One immediate question was whether the strikes could actually accomplish the stated goal of diminishing Syria’s capacity to make and use chemical weapons. But the new strikes also posed the risk of drawing the United States even more deeply into a conflict in which Russia and Iran — who warned Mr. Trump not to intervene — have more invested than ever in keeping President Bashar al-Assad in power.

The strikes hit Syria before dawn on Saturday, with loud explosions jolting residents of the capital, Damascus, from their beds as their walls and windows shook. American officials said the offensive was to punish Syria for what they called a chemical weapons strike on civilians in Douma. They said that the strikes targeted Syria’s ability to research, develop and produce chemical weapons, and that they hit military facilities in and near Damascus and near the central city of Homs.

A statement by the Syrian military said 110 missiles had been fired. One hit a military research center in Damascus; another injured three people in Homs. Videos from Damascus showed Syrian air defense missiles launching into a dark night sky, and the Russian military said that at one Syrian air base, all 12 cruise missiles that targeted the site had been shot down.

American officials said they were still assessing the results, but as the dust settled, some observers were underwhelmed.

“If this is it, Assad should be relieved,” tweeted Randa Slim, an analyst at the Middle East Institute.

Sure enough, early Saturday morning, Mr. Assad’s office posted a video that appeared to show him strolling into work in a suit and tie and carrying a briefcase as if nothing had happened.

Condemnation of the strikes from Syria’s allies was swift. Russia called for an emergency meeting of the United Nations Security Council. Ayatollah Ali Khamenei, the supreme leader of Iran, called the strikes “a crime” and the leaders of the United States, France and Britain “criminals.”

There were no signs of immediate retaliation, suggesting that Mr. Assad and his allies planned to weather the storm, perhaps in the belief that the United States was mostly concerned with avoiding deeper involvement.

“If I were Assad, I would be thinking, ‘Let them get it out of their system. Things are still trending in the right direction today,’ ” said Faysal Itani, a senior fellow at the Atlantic Council. “Nothing that Trump said on television really touched on the Syrian conflict.”

In announcing the strikes Friday night, Mr. Trump suggested that more American action could be on the way. “We are prepared to sustain this response until the Syrian regime stops its use of prohibited chemical agents,” Mr. Trump said. Other officials, however, said the United States and its allies were done for now.

Saturday’s strikes were more extensive than those Mr. Trump launched in the wake of another reported chemical attack last year, but much has changed in Syria in the meantime to make Mr. Assad and his allies more secure.

The rebels who once threatened his control have been routed from all of Syria’s major cities, and even from smaller strongholds like Douma, the last town they held near Damascus, which they surrendered after a reported chemical attack killed dozens of people last weekend.

Meanwhile, the war has further shattered Syria, and international powers including the United States, Russia, Turkey, Israel and Iran — along with militant groups including Hezbollah — have intervened to fight for their interests.

Iran and Russia have expanded their military reach. Russia has a presence on most Syrian military bases, and its air force has been essential to Mr. Assad’s recent advances. Iran has used the chaos of war to strengthen its proxies to deter and possibly confront Israel.

The United States still has about 2,000 troops in eastern Syria working with a Kurdish-led militia to fight the jihadists of the Islamic State. But with the militants now nearly defeated, American officials have started thinking about when to withdraw. Before the suspected chemical weapons attack in Douma, Mr. Trump had said he wanted to bring them home soon.

While the United States called for Mr. Assad to leave power early in the conflict and gave cash and arms to the rebels who sought to overthrow him, it has more recently resigned itself to his remaining in power. That was partly because it feared the vacuum that could emerge if Mr. Assad’s government collapsed, and partly because it was clear that Russia and Iran were willing to invest more in winning than the United States was.

So Saturday’s strikes remained focused on punishing him for using chemical weapons. Last year’s strikes had the same goal, but only succeeded for a limited time.

“Military interventions have a shelf life,” said Andrew J. Tabler, a fellow at the Washington Institute for Near East Policy who studies Syria. “For a certain time, it prevented them from using chemical weapons, but after a while it dissipated. So we’ll have to wait to see how this attack is different.”

Mr. Assad’s allies probably know that any direct retaliation against the United States could quickly escalate into a war they do not want. But they could look for other ways to respond, by striking American allies in Iraq, Syria and Israel, or brutalizing Syrian civilians with conventional weapons in areas the rebels still control.

But they have made it clear that they will seek to protect their substantial investments of blood and treasure.

Before the strikes, the Russian foreign minister, Sergey V. Lavrov, warned the United States against taking “reckless steps,” comparing American strikes in Syria to its interventions in Libya and Iraq. “Now, I hope, no one will gamble on embarking on such a risky venture.”

For Iran, Mr. Assad’s survival is a priority.

On Thursday, Ali Akbar Velayati, Iran’s foreign policy czar, reiterated his country’s support for the Syrian government during a visit to eastern Ghouta, which contains Douma.

“We will stand by Syria’s government against any foreign aggression,” he said, adding that no American strikes would affect the presence of Iranian troops, nor their efforts to build proxy militias in Syria.

“Iran and Syria have never been as powerful as they are today,” Mr. Velayati said. “Those who will remain will be the true owners of Syria, and those who will be destroyed are the Americans and the violators.”

Mr. Trump made it clear when announcing the strikes that he does not consider it the job of the United States to fix problems in the Middle East.

He did however, speak of working closely with American allies in the region such as Saudi Arabia, the United Arab Emirates, Egypt and Qatar to ensure that Iran did not capitalize on the defeat of the Islamic State.

“These strategic messages are more damaging to the regime than the strikes themselves,” said Hassan Hassan, a senior fellow at the Tahrir Institute for Middle East Policy.

Still, such an international coalition would be starting years behind what Russia and Iran have already done, and some of the Arab allies Mr. Trump mentioned are not even speaking to each other. Mr. Trump has so far shown little penchant for the kind of strategic alliance-building it would take to change the direction of the war.

Some Syrians, however, took solace in the sight of smoke rising from Mr. Assad’s military bases.

“For many Syrians, the fact that their butcher was punished is incredibly cathartic,” Mouaz Moustafa, the executive director of the Syrian Emergency Task Force, which opposes the government, wrote on Twitter. “But war continues.”

But the strikes were unlikely to make much difference to the people of Douma, nor to the millions of other Syrians who have been killed, wounded or displaced by Mr. Assad’s forces.

After Douma’s rebels surrendered, residents had to decide whether to stay in their homes under a government that had bombed them or be bused to a part of the country hundreds of miles away.

No American action would keep them in their homes, they said, or restore a part of what they had lost.

“We have heard the threats, but the response will come after the people of the town have been forced to leave their homes,” said a medic from Douma who declined to give his full name because of his fears. “There was lots of talk, but until now nothing has happened.”