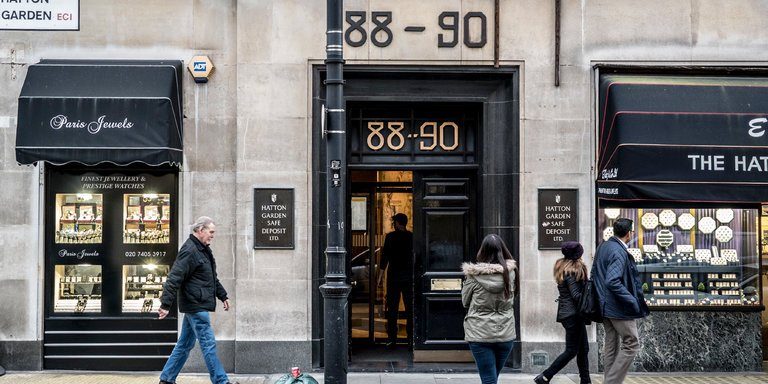 LONDON — The British authorities have made a new arrest in a brazen 2015 robbery in which a gang of graying thieves stole over $20 million worth of cash and jewelry in London, a case that prosecutors have called the largest burglary in English history.

Detectives arrested a 57-year-old man on suspicion of nonresidential burglary in the Hatton Garden case, the Metropolitan Police said in a statement on Wednesday. The suspect, who was not immediately identified, is the latest man linked to the case.

Six other men were each sentenced to between six and seven years in jail in 2016 for breaking into the vaults of the Hatton Garden Safe Deposit company and stealing nearly 14 million pounds worth of cash, gold and gems.

The latest suspect was arrested after the police, acting on a search warrant for an address in North London, seized a number of items Tuesday morning. The man was being held in a North London police station, the statement said. No further information was released.

The burglary had all the trappings of a Hollywood heist, and the theft unfolded in London’s jewelry district during Easter weekend in 2015. The group of men in their 60s and 70s, disguised as workmen, slid down the elevator shaft at Hatton Garden and used a heavy-duty diamond-tipped drill to break through the vault walls.

The thieves ransacked 73 safe deposit boxes and stuffed the loot into plastic garbage cans before making their getaway. Officers later found the book “Forensics for Dummies” at one suspect’s home. They continued to use their cellphones after the burglary, helping detectives to trace them.

Prosecutors said that the ringleaders — Daniel Jones, 61; Terrence Perkins, 67; John Collins, 75; and Brain Reade; 77 — had received an estimated £13.7 million from the burglary, but only £4.3 million has been recovered.

In a confiscation hearing this year, prosecutors said that the gang members must pay back more than £6 million each based on their “available assets” or face an additional seven years in jail.

“A number of these defendants are not only of a certain age, but have in some cases serious health problems,” Judge Christopher Kinch said during the hearing. “But as a matter of principle and policy, it is very difficult to endorse any approach that there is particular treatment for someone who chooses to go out and commit offenses at the advanced stage of their lives that some of these defendants were.”

Mr. Perkins, who had diabetes and health problems, died in his cell in Belmarsh prison in February, a week after he was ordered to pay compensation.

It is unclear if the arrest on Tuesday cleared up the one remaining mystery in the case: the identity of another burglar, known as Basil, who was filmed by security cameras during the theft but who had not been caught. The police suspect that he opened a door to a fire escape to allow the rest of the gang to enter, and that he sought to disable the alarm protecting the safe deposit boxes.

Mr. Jones had written a letter to Sky News saying that Basil was a former police officer who was involved in private security. But prosecutors have said that Mr. Jones misled the authorities in the past. The police had offered a reward of £20,000 for information leading to Basil’s arrest.