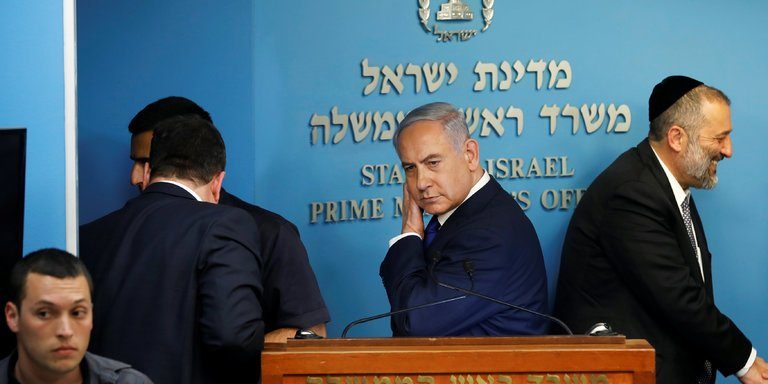 JERUSALEM — Prime Minister Benjamin Netanyahu has backed down under pressure before, but rarely in such a spectacular fashion as he did on Tuesday when he reneged on a deal with the United Nations, just one day after he announced it, to resettle thousands of African asylum seekers in Western countries.

Defending the abrupt reversal, he said he was responding to an outcry from members of his own conservative Likud party as well as partners in his governing coalition who routinely refer to the migrants as “infiltrators” and want all of them expelled. But the capitulation dented Mr. Netanyahu’s image as a master political player who has managed to outlast almost any other Israeli leader.

“This sort of zigzagging is not at all unusual,” said Gadi Wolfsfeld, a professor of political communications at the Interdisciplinary Center Herzliya near Tel Aviv. “But for someone considered such a political genius to make such a miscalculation, that’s the surprising part of the story.”

The episode is a reminder of how beholden Mr. Netanyahu is to hard-liners in his party and his government, constraining him domestically and diplomatically, whether in making concessions to the Palestinians or in fulfilling an agreement to create a new egalitarian prayer space at the Western Wall.

“To sign an agreement and the next day to renege on it, that’s awful,” Mr. Wolfsfeld said. “I guess that means you can’t sign anything with Israel.”

The deal with the United Nations refugee agency might have brought Israel a bit of relief from international criticism of violence along the border with Gaza. Israeli forces killed at least 16 Palestinians during a mass demonstration there against the longstanding Israeli blockade of the territory and in support of Palestinian claims to return to homes in what is now Israel.

Mr. Netanyahu’s latest troubles come at a time when he is already embroiled in multiple corruption scandals that could end up bringing him and his government down. But he still consistently ranks in polls as the most suitable candidate, by far, for the country’s top job and is on his way to becoming Israel’s longest-serving prime minister after the state’s founder, David Ben-Gurion.

Mr. Netanyahu’s Likud party and his coalition partners have so far stuck by him despite the growing list of corruption allegations again him. But the migrant deal — which took most of his partners in the government by surprise — riled some of his closest allies.

As has often happened in the past, Mr. Netanyahu changed direction in the wake of harsh criticism from Naftali Bennett, the education minister and leader the Jewish Home party. While the far-right Jewish Home is in Mr. Netanyahu’s coalition, it also competes with his Likud party for votes.

Bezalel Smotrich, a Jewish Home legislator, said in a radio interview on Tuesday that he would be willing to topple the government over the migrant issue.

“We want the state of Israel to remain a Jewish state. And this means sticking to the right migration policy,” he said.

Mr. Netanyahu said he had made the deal with the United Nations High Commissioner for Refugees because it seemed the only way to reduce the population of African migrants in Israel, who number at least 35,000. The migrants, mostly Eritreans and Sudanese who surreptitiously crossed the border from Egypt before it was sealed in 2012, cannot be returned to their own countries under international conventions for fear of persecution.

The deal with the United Nations refugee agency was meant to replace a contentious Israeli plan to forcibly deport the migrants to Rwanda. That plan fell through because of legal obstacles and after Rwanda said it would accept only asylum seekers who left Israel voluntarily. Given the lack of options, Mr. Netanyahu apparently thought he would be able to sell the new plan to his supporters.

On Monday afternoon, Mr. Netanyahu trumpeted in a live television broadcast what he said was an extraordinarily beneficial deal to resettle nearly half of Israel’s African asylum seekers in Western countries. Under the deal, an equal number would be granted legal status and stay in Israel. Several hours later, he suspended the deal, crumpling under the pressure from its opponents. By midday Tuesday, he canceled it.

“Each year, I make thousands of decisions for the benefit of the state of Israel and its citizens. From time to time, a decision is taken that must be reconsidered,” Mr. Netanyahu said on Tuesday.

“Despite the growing legal obstacles and international difficulties, we will continue to act with determination to exhaust all the possibilities available to us to remove the infiltrators,” Mr. Netanyahu said.

“U.N.H.C.R. continues to believe that a win-win agreement that would both benefit Israel and people needing asylum is in everyone’s best interests. And we encourage the government of Israel to consider the matter further,” the agency said.

William Spindler, a spokesman for the United Nations refugee agency in Geneva, said it found out about Mr. Netanyahu’s retreat only through a late-night post on his Facebook page.

Mr. Netanyahu appears to have burned bridges with Rwanda. Until now, the Israeli government had not named Rwanda as the main African destination for migrants deported from Israel, always referring obliquely to a secret agreement with a “third country.”

But in his Facebook post on Monday night, Mr. Netanyahu identified the country as Rwanda, saying it had agreed to take in migrants who had been deported from Israel without their consent, but then capitulated under outside pressure. In response, Rwanda’s minister of state for foreign affairs, Olivier Nduhungirehe, told Israel’s public broadcaster, Kan Radio, on Tuesday that Rwanda had never agreed to take in the asylum seekers, either in writing or orally, adding that Mr. Netanyahu’s Facebook post “changes the way we should respond.”

To many in Israel, opposition to the United Nations plan makes little sense because all the migrants will remain in Israel, and in limbo, for the foreseeable future.

Daniel B. Shapiro, the former United States ambassador to Israel, commended Mr. Netanyahu on Twitter for the migrant deal soon after it was announced. But he then wrote in a subsequent post: “I guess I have to eat my words. Advocates for Israel like me will have a hard time explaining reneging on a signed international agreement. And the crisis facing Israel and its asylum seekers remains unaddressed, helping no one.”