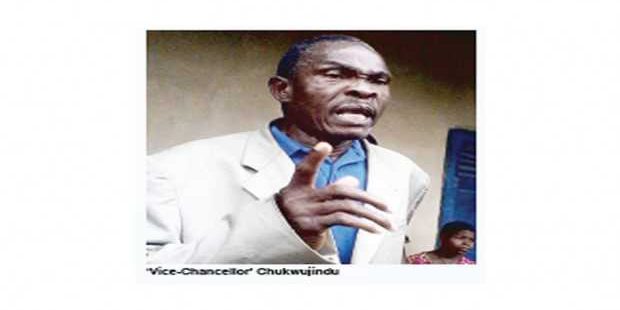 The quest to acquire education at all cost has lured more than 5,000 students into the net of a self-styled medical practitioner and leader of a criminal gang that specialises in extorting money from unsuspecting candidates seeking admission into higher institutions. The suspect, Fidelis Chukwujindu was apprehended by the police while conducting common entrance examination for the victims who reportedly purchased the admission forms at N8, 000 each.

Chukwujindu, who was later discovered to be a native doctor, was eventually nabbed at the premises of his non-existent College Hospital which has the sign post “University College Hospital Ogboko, Ideato, P.O.Box 1960, Orlu, Imo State.

The operator of the illegal college attracted students by printing flyers which he distributes to churches across the country, as most of the students claimed they came to know about the school through their pastors. But a visit to the site makes one wonder how a sane person could possibly fall for such a scam. The administrative office has just a single desk. The accused, who made several claims to buttress his competence of running the ‘college,’ which is sited opposite the proposed site of the Imo State University and adjacent to Rochas Foundation College, said he was an acclaimed Americantrained medical doctor.

He was, however, found to be a native doctor. He said that he had the permission of the State Government and Federal Ministry of education to run his non-existent college hospital. He also claimed to be a product of the prestigious Harvard University, America. According to the suspect, “I won a Federal Government scholarship to study abroad, but was incapacitated by an accident which disfigured one of my legs and I was flown back to Nigeria where I later decided to set up the college.

We were just conducting entrance examination in preparation to take off in a month’s time when the police swopped on us.” He told newsmen at Ogboko that to open such an institution does not require the approval National University Commission, NUC. “It is just how you manage the school that matters, not NUC or any other regulatory body. Moreover, this is a college and not a University and as such I did not obtain approval from the NUC. I went to the Federal Ministry of Education, Abuja, severally where I obtained approval and it is affiliated to the University of London,” he maintained.

Assisting the suspect, who claimed to be the vice –chancellor of the university college hospital, was a middle aged woman later identified as Ngozi Ayoha. The woman, who initially said she was deaf and dumb, caused a stir when it was found that she was the Dean of Faculty of Medicine of the illegal college.

But when the duped ‘students’ revealed that she was pretending, she decided to open up. She said that she was a drop out from a School of Nursing and that the owner of the illegal college was training her to complete her nursing profession.

It was learnt that the woman asks calls and attends to students who come to seek admission into the college. Some of the swindled ‘students’ told Saturday Mirror that they were lured into believing that the school was approved by the various information the owner of the illegal school passed to them. Judith Kanu of Ndiogbuonyeoma Uno, Arondizuogu in Ideato North LGA of Imo State said she got to know about the school through her pastor who gave her one of the flyers.

“When I got to the place I was told that the school is accredited by NUC and that it is also affiliated to a university in London. But we were surprised when the police surrounded the premises when we were taking the entrance examination,” she said. Judith, who applied to read laboratory sciences, had intended pursuing Medicine as her first choice and Pharmacy as second choice.

According to her she had always dreamt of being a medical doctor. Also speaking, Favour Nwabue of 8, Oni Street, New Benin, Edo State, who said she is from Ihiala LGA, Anambra State said her intended course of study was Nursing and that she chose the course to “serve the masses.” Parading the suspect with his victims before newsmen, the Commissioner of Police, Mr. Muhammad Katsina, explained that one striking thing about the strategy of the gang was that they carefully selected the site opposite the Imo State University, Ogboko, and adjacent to the Rochas Foundation College, Ogboko, to convince their victims of the genuineness of their business.

“This is a primitive catalogue of illegality by a self-acclaimed medical doctor who dubiously paraded himself as a product the prestigious Harvard University, America, but who is nothing but a native doctor. And more than 5,000 people from various parts of the country in search of education have been swindled by this young man”.