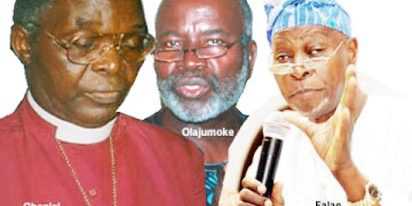 A  Yoruba group, Afenifere Renewal Group, says the National Conference is the last option to save Nigeria from  impending doom, saying “if appropriate care is not taken, we are on a roller coaster down the precipice.”

The group, which advised the delegates to approach all discussions with utmost sincerity and objectivity, warned that any attempt to sweep contentious issues, especially regional autonomy canvassed by the Yoruba of the South-west, under the carpet might spell doom for the country.

The group’s National Chairman, Mr. Wale Oshun, who is a delegate to the conference;  another delegate, Mr. Adebisi Adegbuyi; and other speakers, who stated this at an event held in Abeokuta, noted that the country had carried on as if the ethnic nationalities understood one another. The Afenifere  Chairman  said there was the need to resolve lingering issues in the country.

“The National Conference is not a waste of time, if one takes into consideration the political developments evolving in the country currently. These are delicate times for Nigeria. If appropriate care is not taken, we are on a roller coaster down the precipice,” Oshun said.

“We want to keep our patience to go through the whole process of talking and negotiating, and that commonsense will prevail accross the country.
“We cannot pretend to be one people. We must understand our differences. There must be things we will do differently. And the national conference offers us a veritable forum to resolve this,”he said.

While speaking on regional autonomy being canvassed by the delegates from the South-West, Oshun said there have been challenges from delegates from other parts of the country who are against it. “We are still pushing on this, we will not give up. As it is now, the country cannot survive unless there is a change.
“And so if something tangible does not come out of the National Confab, then there is nothing  to reverse the collapse of the country. We hope we will be able to save the country.”

On his part  Adegbuyi  called for  the re-structuring of the country along regional lines, warning that  danger loomed if the country went ahead with the 2015 elections without resolving the differences.
He stated, “If we conduct elections  in 2015 as we are now as a country with so many issues unresolved, so many fluids in the air, the bubble will burst.”

Also speaking on the issue of regional autonomy, yesterday, another delegate from the South-west to the National Conference, Yinka Odumakin, said, “Yoruba have always canvased for regional autonomy within the Nigerian federation.That was the essence of Awo’s engagement with Nigeria throughout his political career for which he spent 44 out of the first 66 months of Nigeria independence in one confinement or the other.The Yoruba can’t understand why any reform that would allow them any measure of autonomy is being shut down.They recall that the autonomy they had before independence and shortly after made them to think of  WNBC/WNTV which is today FRCN/NTA.”

However, Chief Bode George,  a South-west  member of the  Committee on Politics and Governance at the confab, said, “This idea of going back to regional government is absolute rubbish. It is nonsense. I don’t agree with that. It is not gonna fly. Do you want us to go back to Ibadan? Do you think any of these states is ready to go back to Ibadan? Why are you talking about region? Which region again? That is gone. Who is talking about that? We have told them it is not gonna work. I don’t support it. We can have economic cooperation regionally.”