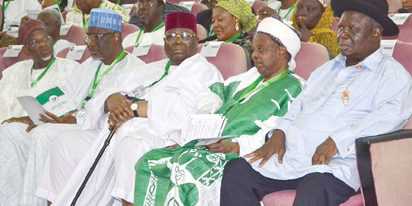 The Niger Delta will demand reparation from the Federal Government at the ongoing National Conference, a delegate, Prof. Godini Darah, said yesterday.

According to him, the region that provides the oil, which is the mainstay of the country’s economy, is the worst victim of inequality, corruption and bad governance.

Darah, however, did not specify the amount the region will be requesting.

He spoke in an interview with the News Agency of Nigeria (NAN) in Abuja.

“Niger Delta states are the worst victims of inequality, bad laws, plunder, corruption and bad governance that have happened in Nigeria.

“This is because we are the ones whose resources have been stolen for 45 years since 1969, when the petroleum Decree No 51 was enacted by the military regime of Gen. Yakubu Gowon.

“By that degree, the Federal Government has monopoly over income and revenue that come from oil and gas and Niger Delta is floating on oil and gas.

“So, we are the most injured, most exploited and the most dispossessed region in the country.’’

Darah said for this reason, Niger Delta delegates were prepared “morally, philosophically and intellectually’’ not just to set the tone for the conference but also to correct the injustice that had allegedly been meted to the region.

He said that the delegates had conducted an extensive research on all the ramifications of petroleum resources and how it had harmed and injured their people, society and territory.

“We have documented it for over 10 years, so we are loaded with data; we took it to the national conference of 2005 which was aborted.

“ We have now updated the research and we are going to offload them in this conference.’’

The don said that the expectation of the Niger Delta region was that the laws, decrees and policies deliberately enacted to dispossess the region of its oil and gas wealth must be expunged from the constitution.

“The most notorious one of them is section 44, sub-section 3, of the constitution. The section says that all minerals and natural gas found on the earth, below the earth, in the air, under the sea and wherever it is found, belong to the Federal Government of Nigeria.

“That is the most precious wealth that we have and it is a wealth that exhausts by constant exploitation. The more voraciously they exploit it, the less will be the reserve left for those who are alive now, for the children who are coming.

“They are also hollowing the earth and going to cause geological imbalance,’’ he said.

Darah said that the damage these laws had done to the Niger Delta could be not repaired with any amount of money.

However, he said the delegates came to the conference with a request for financial repatriation equivalent to the injury and damage done to the region’s ecology.

He said that these damages ranged from the farm lands to the rivers that no longer produced fish, adding that it also extended to the children who had become vagrant and deviant, rebelling against their parents whom they felt had sold their heritage to foreigners.

“It is a very complicated matter but it can be resolved in instalments. The first stage is for those laws to go.

“We have a litany of the laws; we have the Land Use Act, and there are also some laws that say all of us living on the bank of rivers are tenants of the Federal Government.

“It is in the law that any distance 100 metres from the bank of the rivers belong to Federal Government.

“And we have 3,000 waterways in the Niger Delta; so all of us are tenants of the Federal Government.’’

According to him, some of these laws can never be found even in developed countries.

Darah praised President Goodluck Jonathan’s moral conviction to convoke the conference, describing it as an opportunity for any part of the country with grievances or feeling that issues affecting them had been buried, to articulate and ventilate them.