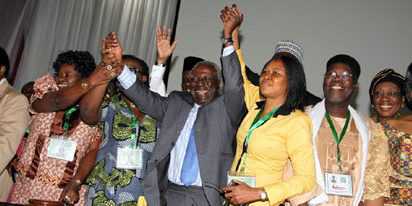 IN spite of odds, delegates, yesterday, adopted the final report of the 2014 National Conference amid exchange of banters and pleasantries, thereby ending the five-month exercise on a positive note.

They will now reconvene on August 21 for the closing formalities.

The conviviality, camaraderie and hugs, which characterised the last plenary of the confab were unexpected giving the controversies that trailed the draft report and “draft constitution” produced by the national conference secretariat.
On Wednesday, a section of the Northern delegates distanced itself from the draft constitution and vowed not to pass it but Southern and Middle-Belt delegates differed and said they would adopt the report and draft amendments to the 1999 Constitution.

Thus, the stage was set for a thorny plenary yesterday but the delegates disappointed those who expected a chaotic outing by adopting the report.

However, the report did not pass without minor alteration of the title from “draft constitution” to “Draft Proposals to Amend the Constitution of the Federal Republic of Nigeria, 1999”.

The alteration followed an amendment by Delegate Adamu Waziri, a former Minister of Police Affairs, to a motion co-sponsored by High Chief Jerry Okwuonu and former governor of River state, Dr. Peter Odili asking the delegates to empower the secretariat of the conference to effect all necessary corrections on their behalf using the various submissions made by the delegates.

According to them, the action would save the time of the conference.

The motion reads: “Whereas the secretariat has done a very marvellous job of compiling the report of the Conference and presenting same to us in easily readable and cross-checkable format; and

“Whereas delegates have perused all the reports and submitted in writing all items of omission or incorrect addition to the final report; and
“Bearing in mind the dual necessity of bringing the conference to a close for purposes of not unduly over-reaching the logistics provision of the conference and not unnecessarily prolonging the continued conglomeration of people in contradiction to the prescription of Health Authorities especially as the country tackles the Ebola crisis.

“It is hereby moved that the secretariat be mandated to vet all the written submission by delegates and make necessary correction thereby providing the final draft of the Conference reports.”

Just before the motion was seconded and adopted by the delegates, Waziri announced an amendment to the motion.

He said:  “To cultivate a conducive environment for delegates to validate and adopt the final report of the Conference, we the undersigned delegates, hereby offer and endorse the following observations and recommendation that seek to facilitate the process and lead to amicable ending of the Conference proceedings.   “We note that the Secretariat of the Conference on August 11, 2014 tabled before delegates a draft report contained in three volumes that are broken down in seven chapters.

“In particular, we observed that volume III titled Draft Constitution conveys an attempt to insert various resolutions and recommendations of a constitutional nature that were adopted by the Conference as proposed amendments to the appropriate sections of the Constitution of the Federal Republic of Nigeria, 1999.

“We recall and welcome the clarification and confirmation offered by Conference Chairman at plenary on August 13, 2014 that indeed Volume III contains proposals for the amendment of the 1999 Constitution.

“We urged the leadership of the Conference, in collating the final report, to more appropriately designate Volume 111 as: Draft Proposals to Amend the Constitution of the Federal Republic of Nigeria, 1999.

“Furthermore, we note and welcome the amenability of the Conference Secretariat to entertain suggestions from the delegates that point out any specific error to misrepresentation of decisions taken or resolutions adopted by the Conference and/or any inadvertent failure to incorporate same in the draft report.

“We are aware that delegates have responded to this call and submitted to the Secretariat their various observations and suggested amendments to the draft.

“In preparing the final report, we urged the Conference Secretariat to keep faith with and reflect fully and accurately all resolutions and recommendations accepted by the Conference and as contained in votes and preceding that were formally adopted.

“Subject to the acceptance of the foregoing understanding, assurances and conditions and in accordance with the Procedure Rules, 2014 of the Conference, we move for the validation and adoption of the draft reports contained in volume 1,2 and 3 without further debate.

“In the spirit of the consensus building cultivated by members and to maintain the bridges built during the currency of the Conference, we urge all delegates to subscribe to this plea.”

His amendment which sought for a re-title of the report eventually received an overwhelming support when subjected to voice vote by the chairman of the conference, Retired Justice Idris Kuitigi.

With that, the report was unanimously adopted by the delegates thereby marking the end of the 2014 national conference.

Spontaneously, all the delegates who felt fulfilled stood up and enthusiastically sang the old National Anthem “Nigeria We Hail Thee”. Similarly, chants of labour solidarity songs rent the air.

Former Minister of Justice, Chief Richard Akinjide, SAN, who was arguably the oldest man in the conference was called upon by the chairman to move the motion for the adoption of the final report while the youngest delegate to the conference, Miss Yanomah Mandara seconded it.

Shortly afterwards, delegates took turns to pour encomium on the leadership of the Conference for their maturity in steering the conference proceedings.

Also, a delegate representing the South- South, Hon. Orok Otu Duke, read out a farewell poem titled “How Can We Say Farewell” to the delegates.

After the adoption of Votes and Proceedings of the day sequel to a motion by Iyom Josephine Anenih and seconded by Dr. Bello Mohammed, Justice Kutigi called on the Lamido Adamawa, Alhaji Mohammed Mustapha to move a motion for the closure of the Conference.

Chief Mike Ahamba while seconding the motion said, yesterday was a day of pride and honour because “when we came here, nobody expected us to end this way…We have disappointed the skeptics.”

With that comment, the 2014 National Conference inaugurated by President Goodluck Jonathan on March 17, 2014 came to an end.

In a brief press conference shortly afterwards, the northern delegates forum led by former a Inspector General of Police, IGP, Alhaji Ibrahim Coomassie, Professor Ibrahim Gambari and retired Gen. Jerry Useni said they were satisfied with the change of the title and the subsequent adoption of the final report, saying that their earlier opposition was for unity and peace of the country.

Speaking to Vanguard on the outcome of the conference, some delegates who expressed utter happiness said reason and understanding prevailed.

“I feel happy. I feel elated, honoured and privileged to be part and parcel of this conference that ended harmoniously with everybody clapping hands, hugging, singing “though tongues and tribe may differ, in brotherhood we stand”. People expected turbulence. People expected fight. But you can see Nigeria is a country put together by God. And I will say welcome to a new Nigeria.”

Chief Victor Umeh, the national chairman of All Progressive Grand Alliance, APGA, said: “I feel happy and completely satisfied that this initiative has not been a waste of time. Nigeria needed the conference very much and some people came here with a mind set to forestall this conference but we have been able to navigate these very critical, important national issues. They were addressed and resolutions were reached on all of them.

During plenary, it was obvious that some people wanted Nigeria to remain the way it is. But Nigerians rallied round in this conference to ensure that what will come out will address the problems that are nagging the nation.”

Similarly, the former President of the Senate, Adolphus Wabara, Abia delegate commended the wit of Adamu Waziri who proposed the changed.

“I will say to God be the glory. Most of us did not expect that it would have ended the way it did particularly with the sensational headlines we saw in the dailies. In politics, we say that one minute is too long in political decisions and I think that was exactly what happened here. I also want to thank the North through my very good friend, Adamu Waziri for amending the motion which really doused the situation because talking about a brand new constitution would have torn the conference. But he came up wisely with the fact that there were proposals to the amendment of the 1999 constitution as amended.

“So, that really doused the situation and it ended up on a very sound note as far as I am concerned. And I want to beg the National Assembly and Mr. President to take the recommendations very seriously and not just locking it up in locker and the National Assembly should forgive and forget the bad words used against them during this conference. They shouldn’t throw away what this conference has done,” he said.

For Sola Ebiseni, a local government council representative from Ondo State, the successful end of the conference is victory for Nigeria.

He said: “The conference ended as victory for the Nigeria state, pride of the African continent and the back man. It shows that in dialogue, we can achieve so much as a people. There is no doubt that in the last one week or so, the impression to the Nigerian public and to the whole world was that the conference was going to end in fiasco. But we have demonstrated our maturity as a people, as Nigerians that when we are gathered, the best in us can always come out.”