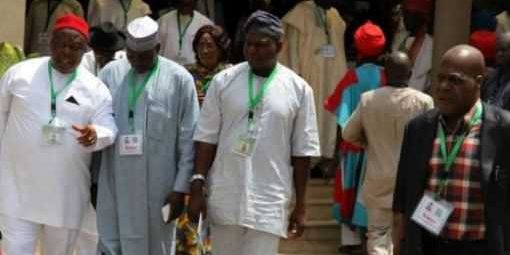 For the third day running, the National Conference sitting in Abuja failed to find a solution to the contentious issue of resource control or derivation.

The conference, on since March 17 and gradually winding down, had to once more adjourn abruptly as those for and against an increase of the derivation fund refused to reach a compromise.

While the South, especially the oil-bearing South-South and South-East favour a hefty increase in the fund, the North remains opposed to it, with some northern delegates even arguing for a reduction from the present 13% .

A special committee set up by the conference to resolve the issue had in its report presented yesterday during plenary by Prof. Ibrahim Gambari, proposed an increase in derivation to 18 per cent to the oil bearing states. It also proposed 5 per cent first line charge for the development of mineral resources and another 5 per cent National Invention Fund in Boko Haram devastated areas in the North East, as well as other areas affected in North-Central and North-West.

The recommendations were greeted by cheers and jeers, thus forcing the Conference leadership to abruptly adjourn and announce that voting on the proposals and on the Land Use Act would take place today.

The Committee on Devolution of Power had in its report recommended that due to the sharp division created during discussions on the issue and based on the capacity of such division to destabilise the Conference and even the nation, the status quo (13%) should be maintained.

This, it said, was to avoid upsetting “the existing peace and equilibrium in the polity,” which it described as a product of years of political engineering and craftsmanship by the founding fathers of the Nigerian nation.

However, tempers rose sharply during the debate on the report, with delegates from the North and the South taking opposing positions on the critical issue.

While delegates from the South insisted on increase between 25% and 50%, those from the north said nothing more than the position of the Committee on Devolution of Power would be acceptable to them.

This necessitated the handing over of the matter to a special committee comprising leaders of each geo-political zone, who then picked other delegates from their zones, for discussion and possible resolution.