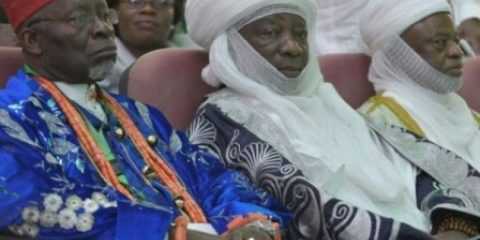 The National Conference today set the minimum academic qualification for candidates seeking elective positions. For the Presidential, Governorship and National Assembly candidates, first degree or its equivalent was set as the mandatory qualification.

Electoral Commission (INEC). It was observed that SIECs have outlived their usefulness and have become tools for governors to manipulate elections into local government councils.

Also today, a proposal for the review of the Electoral Act to further strengthen INEC’s capacity to effectively monitor party conventions was accepted by the Conference.

These resolutions were part of the recommendations adopted during the debate and consideration of report of the Committee on Political Parties and Electoral Matters headed by the duo of Senator Iyorchia Ayu and Senator Ken Nnamani, both former Presidents of the Senate of the Federal Republic of Nigeria.

Conference equally accepted a recommendation for the establishment of a Political Parties Regulation and Electoral Offences Commission to be vested with various responsibilities connected with electoral matters.

Among the responsibilities of the Commission would be to investigate all electoral frauds and related offences; identify, trace and prosecute political thuggery; and other electoral offences as well as monitor the organisation and operations of political parties, including their finances.

Conference also resolved that appeals from judgments in pre-election matters to the Court of Appeal or the Supreme Court should be filed within 21 days from the date the judgment of the lower court is delivered.

Conference, after an exhaustive debate, also accepted the recommendation that the Evidence Act be amended to shift the burden of proof in election matters to INEC.

Still on election litigation, Conference agreed that relevant provisions be made in the Electoral Act to ensure that no elected official is sworn in until all litigations on the elections are concluded.

In addition, it agreed that any candidate adjudged by the courts to have been fraudulent in the electoral process should not only be barred from subsequent elections but should be disqualified from vying for any elective office or holding any government position for ten years.

It was also resolved that in addition any person removed from office, based on the decision of the court on fraudulent election, must lose all privileges attached to that office.

Another resolution was that if a candidate is disqualified by the court for not meeting the required qualification for contesting an election, or in situation where such a person is elected and the court orders him to vacate the office, the candidate with the second highest number of votes should be declared winner.

This recommendation, according to the delegates is to avoid waste of public funds to repeat elections consequent upon removal of disqualified candidate.

On the appointment of INEC chairman, Conference accepted the recommendation of the Justice Mohammed Uwais Report regarding the manner of appointing the INEC chairman.

Conference also accepted the Committee’s recommendation that any elected officials, executive or legislative who engages in cross-carpeting, regardless of the reasons for such, shall automatically forfeit his or her seat.

This provision, it said, shall not relate to cases where political parties merge to become a mega party. In such a case, Conference agreed that elected officials should have a choice to freely choose any political party they want to belong.

However, it was agreed that elected officers whose political parties, on whose platform they won election, later merge with other political parties after the elections should be allowed to retain their seats.

It agreed that accessible polling stations be established for persons with disability and that INEC should provide Braille ballot papers for the visually impaired persons.

The recommendation by the Committee that if the candidate whose name was submitted to INEC dies or withdraws from election or is disqualified by the court of competent jurisdiction, the political party which nominated the candidate shall forward to the commission the name of the aspirant who scored the second highest number of vote at the primaries as the substitute candidate was accepted by the Conference.

It was agreed that special mandatory provision should be made to compel INEC to electronically transmit result from all the wards upon conclusion of the counting process and that election results should be pasted at all ward levels.

The Committee’s recommendation that government houses, cars and other facilities and resources should not be used for the partisan interests of any political party was endorsed by the Conference just as it endorsed another recommendation that it should be made mandatory by law for INEC to limit the numbers of voters in a polling unit to 500 as well as create as many polling units as the number of registered voters in every constituency.

As part of that, it was also agreed that the criteria for delineation of the units should be clearly spelt out for easy verification so that communities in need of redress and civil society organisations can have verifiable facts to seek redress.

It also accepted the recommendation that makes it mandatory for all candidates seeking election to the office of President, Vice President, Governor, Deputy Governor or such other office as may be deemed appropriate at every general election to participate or attend political debates which shall be hosted prior to the date of general election.

The Conference also agreed that in multi-party systems, parties can only contest local government elections, state elections and federal elections should be allowed to exist. Delegates voted that May 29 should no longer be seen and observed as Democracy Day.