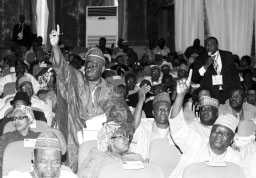 On Wednesday, 26th day of March, 2014, the leadership of Intersociety released the first part of this public statement, detailing with strong condemnation “how Nigeria borrows to squander” with specific reference to borrowing and squandering of a whopping sum of N7 Billion at the ongoing National Conference on “ delegates’ allowances and related logistics”. The legal source of the money has also become a national concern as it could not be traced to the un-passed federal budget of 2014. The huge sum is believed to have been borrowed and squandered without considering the fact that the country’s teachers at the public colleges of education and polytechnics have been on indefinite strike since October and late December 2013 respectively over a twenty-point of disagreement with the Federal Government of Nigeria.

This is not minding the fact that one of the major reasons why government exists is the provision of quality, uninterrupted and affordable education to the citizenry. Education is also a second generation industry after family and shares the same boundary with “the fundamental right to life”, because an uneducated person is not only a moron, but also a beast-like being and life without education is an incomplete life. When school pupils are in classes they are kept away from juvenile delinquencies and when students are in classes, they stay away from crimes and avoid being in conflict with the law especially the criminal law. Education is an industry because it offers formal and informal employment to those accessing it both as the mentors and the mentored. The fundamental provisions of the Nigerian laws make the following express pronouncements and commandments on education.

“Government shall direct its policy towards ensuring that there are equal and adequate educational opportunities at all levels”–Section 18(1) of the Chapter Two (Fundamental Objectives & Directive Principles of State Policy) of the Constitution of Nigeria 1999 as amended in 2011. Section 18(2) says: “Government shall promote science and technology”. Section 18(3) provides: “Government shall strive to eradicate illiteracy; and to this end, Government shall and when practicable provide (a) free, compulsory and universal primary education, (b) free secondary education, (c) free university education; and (d) free adult literacy programs”. Section 39 of the Chapter Four (Fundamental Human Rights) of the Constitution strongly adds “Every person shall be entitled to freedom of expression, including freedom to hold opinions and to receive and impart ideas and information without interference”.

Coming from the angle of Article 17 of the African Charter on Human & Peoples’ Rights of the AU 1981 (African Charter on Human & People’ Rights Ratification & Enforcement/Domestication Act of the Federal Republic of Nigeria 1983), “Every citizen shall have right to education” and  according to Section 1(4c) of the Nigeria’s National Policy on Education of 1998, “Every Nigerian child shall have a right to equal educational opportunities irrespective of any real or imagined disabilities, each according to his or her ability”. Its Section 1(5) clearly and unambiguously states “Nigeria’s philosophy of education is therefore based on: (a) the development of an individual into sound and effective citizen; (b) the full integration of the individual into the community; and (c) the provision of equal access to educational opportunities for all citizens of the country at the primary, secondary and tertiary levels both inside and outside the formal school system”.

Shockingly, the successive squandermania governments of the Federation of Nigeria and the present ones have criminally and immorally turned blind eyes to these sacred provisions. Instead, they channeled and continue to channel over 70% of the country’s annual gross earnings into “real overheads” and “real recurrent (personnel)” bloated expenditures. These huge public expenditures have no direct positive impacts whatsoever on most Nigerians, except a paltry 17,500 top public office holders and their subordinates. Specifically, the Federal Government’s spent budget of N4.99 trillion of 2013 and the un-passed and unspent budget of N4.91 trillion of 2014, clearly show that only 1,113 top federal public office holders, which include the President and his vice, about 472 ministerial and non ministerial executives, 172 federal judges and 469 federal lawmakers and machineries of their offices, out of the country’s 17,500 top public office holders, take over N2 trillion off the respective budget.

While N1.4 trillion is provided in the 2014 un-passed budget for maintaining their office machineries, another whopping N1.723 trillion is to be spent on “real recurrent” (salaries, allowances and emoluments) of the same 1,113 federally privileged citizens and other federal public and civil servants. According to the Salaries & Allowances for Top Public Office Holders in Nigeria Act of 2002 as amended in 2008, there are 17,500 top public office holders in Nigeria. They include 11,788 LGA councilors and executives (8,692 councilors and 3,096 executives), 2,664 State executives, 1,152 State lawmakers, 762 State judges, 472 Federal executives, 469 Federal lawmakers and 172 Federal judges. The said top public office holders’ wage Act, after its amendment in 2008, was astronomically reviewed from N755 billion in 2002 to N1.13 trillion in 2008.

In other words, it now takes (officially) Nigeria a whopping sum of N1.13 trillion annually to service her 17,500 top public office holders. This includes N592 billion spent on 11,788 top Local Government officials, out of which, N550 billion goes for allowances alone and only N42 billion spent on their statutory salaries. Conversely, the reality as evidenced by the budgetary provisions under reference, shows that more than this amount is spent annually in servicing the Federal Government’s 1,113 top office holders in the form of “salaries, allowances and emoluments” and “real overheads” (running government affairs).

For instance, the 2014 budget proposal arithmetically shows that out of N4.91 trillion proposed, N1.723 trillion is to be spent on payment of salaries, allowances and emoluments (real recurrent) of federal top public office holders and public and civil servants. Servicing of Federal Government machineries called “overheads”, manned by 1,113 top citizens is to cost N1.4 trillion, while N712 billion is reserved for debts servicing. Only a paltry sum of N1.1 trillion is to be spent on capital projects. In other words, out of every N100.00 spent publicly this year, N80.00 is on recurrent and overhead and out of N4.91 trillion budgeted, 12% of it is borrowed and its 14% is returned to the coffers of the borrowers as “debts servicing”.

As a result of the December 11, 2013 fresh agreement between the Federal Government of Nigeria and the leadership of the Academic Staff Union of Universities (ASUU), the over five months industrial action embarked upon on July 1, 2013 by the latter was brought to an end. The ASUU/FGN disagreement that led to the strike was as a result of non-implementation of the 2009 Agreement, which included “Earned Allowances” for public university teachers amounting to about N92Billion. As expected, the Federal Government went to local capital markets and borrowed to appease the striking university teachers. In response to the above, the public tertiary institution teachers under the aegis of Academic Staff Union of Polytechnics (ASUP) and the Colleges of Education Academic Staff Union (COEASU) went on indefinite strike in October and late December 2013 respectively.

There are 297 universities and other post secondary school institutions in Nigeria as at December 2012. They include 37 Federal and 37 State universities as well as 50 private universities (124). Others are 22 Federal, two State and two private Monotechnics (26), 36 Federal, 48 State and 13 private polytechnics (97) and 17 Federal, 30 State and three private colleges of education (50), totaling 297 publicly recognized higher institutions in Nigeria. In other words, 36 Federal and 48 State polytechnics (84) as well as 17 Federal and 30 State colleges of education (47) have been on strike for the past five and three months respectively. While the National Universities Commission (NUC) Act of 1974 regulates universities in Nigeria, the National Commission for Colleges of Education (NCCE) Act of 1989 as amended in 1993 overseas the colleges of education. On the other hand, the National Board for Technical Education (NABTE) Act of 1977 regulates polytechnics and other technical institutions in the country.

Public Polytechnics: 1. Renegotiation of the 2009 ASUP/FGN Agreement. 2. Non-release of the white paper on the visitation panel to federal polytechnics. 3. Non-establishment of a National Polytechnics Commission. 4. Non-passage of the Federal Polytechnics Review Bill by the National Assembly. 5. Non appointment of qualified rectors at public polytechnics. 6. Dilapidation in the State owned polytechnics. 7. Need to address the discriminatory inclusion of polytechnics in the Integrated Payroll & Personnel Information System scheme. 8. Structured and comprehensive funding of polytechnics in Nigeria. 9. Lopsided distribution of “Tetfund” grants and other interventions in tertiary sector. 10. Non full implementation of the salary structure approved for polytechnics in 2009. 11. Removal of discrimination of HND graduates in public service or during job search. 12. Non-release of funds for the implementation of “CONTISS 15 migration and its arrears”.

Public Colleges Of Education: 1. Infrastructural decay in public colleges of education and poor funding. 2. Non implementation of the 2010 COEASU/FGN Agreement. 3. Need to address poor conditions of service in public colleges of education. 4. Need to address the issue of brain drain or academic capital flight. 5. Illegal imposition of Integrated Payroll & Personnel Information System scheme. 6. Refusal by the Federal Government to fund peculiar and responsibility allowances as obtained in “Earned Allowances” of the public universities. 7. Refusal by the Federal Government to implement the migration of lower cadres as obtained in the public polytechnics. 8. Non accreditation of selected programs of the colleges of education in Nigeria, among others.