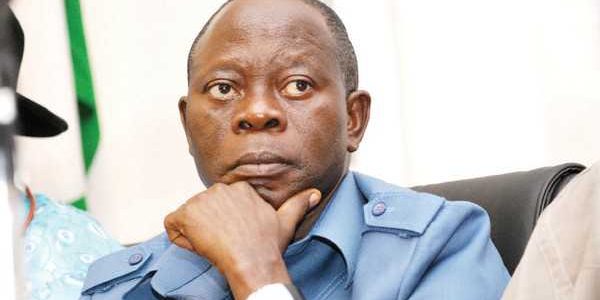 Political party thugs hired by politicians and parties yesterday clashed during the proceedings of the Presidential Advisory Committee on National Dialogue/Conference meeting in Benin City, Edo State bringing the meeting to an abrupt end.

Members of the committee and participants took to their heels in the ensued melee. The beginning of the end of the meeting that held at the rebuilt Imaguero College on Sapele Road started when the committee made frantic but unsuccessful attempts to stop Edo State Governor, Comrade Adams Oshiomhole and others from making their contributions to the debate.

Attempts by the committee led by Col. Tony Nyiam (retired), to shout down the state governor from making a point that they probably felt uncomfortable about, ignited the melee that soon resulted into a free-for-all by thugs loyal to the different political parties in the state, during which chairs, tables and sticks were freely used to inflict severe injuries on participants. It all began when a group of thugs believed to have been hired by one of the political parties began to heckle the

governor, who started with a complain about the lack of agenda for the meeting.

Oshiomhole began by stating his objection to the spending of huge public funds on a wasteful venture such as the dialogue while insisting that during the tenure of President Olusegun Obasanjo, money was spent on a similar conference at the end of which nothing came out. “I will be surprised if anything changes. Sincerely, I have no business to deceive or mislead anyone.

I believe that the outcome of this conference will not be different from that of other conferences we have had in the past,” he said. But as soon as Oshiomhole made his statement, committee member, Nyiam rose and shouted the governor down while he was still making his contribution before he was joined by some thugs who attempted to stop the governor too. While the governor insisted on concluding his remarks, he however yielded on the floor when the thugs were getting violent.

Before the proceedings, the governor, had at a courtesy visit on him in his office by members of the Committee led by Senator Femi Okurounmu, said he had no faith in the whole process. Oshiomhole said: “All I owe Nigeria now is to speak my mind. It could be error of my head but certainly not of my heart.

As much as I wish you well, I just want to say that I have no faith in this process and I do not think it was necessary at all. “I am unable to find any basis to give me some illusion that this exercise will not be different from the others.

And I honestly think that in terms of the private sector, when a country keeps debating how we can live together that cannot be one of the basis on which the outside community will invest in Nigeria. They may well wait until we know how we want to live in Nigeria.”

He lamented that 53 years after independence, Nigerians still prefer to look at themselves from their ethnic origin rather than being Nigerians, saying, “for me, I am just a Nigerian.”

He added: “I do not think that more than 100 years when we have set aside billions of naira to celebrate centenary, celebrating the fact of our amalgamation of the North and Southern Nigeria, and we have lived together as one country for over a 100 years, and we have gone through independence, we have been free for 53 years and we are coming back to ask the question, how could we be there. “I think Nigeria needs to address very serious issues.

When I see eminent Nigerians discussing this issue, I am sure they know that Nigeria’s problem is not this politics of sharing which the national dialogue is all about, who is getting what, who has this natural endowment, who should do this or not do this.

For me, this is the act of perfecting poverty. “The real challenge is getting Nigeria back to production. The real challenge is creating industrial base and this cannot be resolved through conferences. We have moved from parliamentary system in our own wisdom to the presidential system. We have test-run it and it was aborted by the military and it has reincarnated in the present form. “Nigeria does need a serious reflection about how to return to those core values that made Nigeria work before.

Those healthy competition between the governments, visit the whole question of attitude and unless that changes, I do not see how any dialogue can work.” Oshiomhole regretted that many conferences have been held in the country without any tangible result.

“I was discussing with somebody last week and he noted that this is the 11th conference and I ask what 10 conferences could not do, how would the 11th one do it? Why do we think we can continue doing the same thing the same old way and think that this time the outcome would be different?” he asked.

Earlier, Senator Okurounmu said they were in Benin as part of their visit to the six geo-political zones to get their input as regards the content of the agenda, the duration, choice of delegation and legal framework.

Meanwhile, the Advisory Committee has condemned the disruption of its proceedings. A statement signed by Okurounmu said the committee took exception to the “unruly conduct” one of its members who joined the crowd in shouting down the governor. “We want to emphasise that the committee will listen to all shades of opinion in the areas of its mandate and will not henceforth condone the kind of unacceptable behaviour we witnessed in Benin City on Monday,” he said.