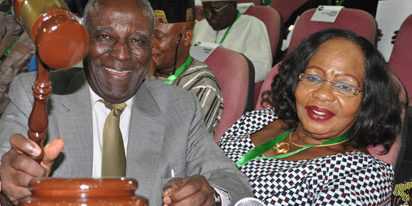 In a bid to prevent any tension that may arise over the sharing of committees to delegates at the on-going National Conference, President Goodluck Jonathan, weekend, summoned the Chairman and members of the confab secretariat to his office for a crucial meeting.

The meeting, according to a Presidency top source, was basically to enable Jonathan brief them on the importance, which the administration attaches to the confab and the need to ensure that the overall wish of the majority of Nigerians at the confab prevails.

It was learnt that the President told the chairman and his officials that he had no pre-conceived position on any issue being discussed at the confab and was ready to abide by whatever the outcome of the conference would be.

The Presidency source said:  “The main issue was to assure the chairman and his members that this administration was determined to ensure the success of the on-going conference and to make the point that the President does not have any pre-determined position on any of the issues being discussed by the delegates.

“The President made it clear that even the address he presented to the delegates on the inauguration of the confab on March 17, 2014 did not amount to his own position but his thoughts and those of many other Nigerians who had been reflecting on the same issues over the years.

Kutigi is said to have assured the President that he and his team were determined to use the confab to make history for Nigeria and would not do anything that could jeopardise its success.

Apparently in a bid to douse potential tension over the list of committees and their chairman due to be unveiled today, the Chairman and the other officials of the confab had been brainstorming on the matter since Thursday last week.

They are said to have been holding what a source described as >strategic brainstorming sessions in the last few days in order to get everything right about the composition of the 20 committees and their chairmen to be announced at plenary today.

Findings by our correspondent revealed that the confab management had decided to placate any tension that may arise over the composition of the committees by ensuring that North and Southern parts of Nigeria will get ten chairmen and deputy chairmen respectively.

The composition of the committees is to reflect the strength of the six geo‑political zones and to also cater for the interest of women, who are at the confab.

It was learnt that each zone might get no fewer than three committee chairmen so as to give equal sense of belonging to all parts of Nigeria and promote peace.

Further findings revealed that most of the delegates preferred to serve on the Committees on Devolution of Power, Government Structure and Governance based on the choice they submitted to the secretariat on which committees they would like to serve.

Vanguard also learnt that with the release of the list of committees and their chairmen, the delegates would spend about three weeks to deliberate on the issues assigned to them.

There were indications that the delegates were unanimous in their resolve to ensure that the confab was not extended beyond the initial three months that the Federal Government proposed.

The confab may be rounded off before the end of June, if it is not extended as a result of the clamour for more time to deal with contentious issues that may arise during the committee stage.

President Jonathan inaugurated the confab on March 17, 2014 with only one demand: the indivisibility and indissolubility of Nigeria should not be discussed throughout the deliberations.

After the initial hiccups that attended the opening of the confab, the delegates have settled down to the business of discussing the issues that could shape the future of Nigeria.

Many Nigerians have suggested that the outcome of the conference be subjected to a referendum so as to become laws while others insists it should go to the National Assembly, which is saddled with the duty of law‑making for Nigeria.