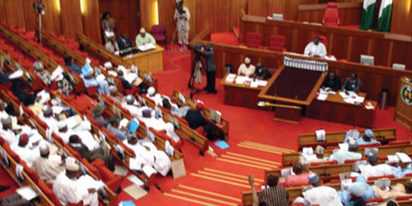 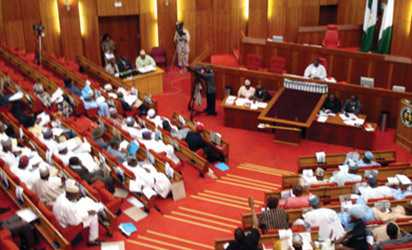 ABUJA—THE Conference Committee of the National Assembly on Constitution Review yesterday retained the immunity clause for the President and the Governors which was originally in the Nigerian Constitution but was recommended for removal by the House of Representatives.
The Conference Committee also approved immunity for legislators in respect of words spoken or written in the exercise of their legislative duties.
Also adopted by the Committee was the power conferred on the National Assembly and the State Assemblies in Section 58 and 100 to override the National-Assembly-MembersPresident or the Governor in an event there was
an impasse where the President or the Governor of a state refused to append his assent on any passed law.
The Committee said overriding the President or Governor that refused to signify his assent or withholds it after 30 days of its passage would strengthen legislature’s authority and enable timely passage of laws for good governance.
Section 65 and 106 of the amended Constitution also made provision for independent candidacy in election, while Section 124 has deleted the State Independent Electoral Commission from the Constitution. The body was initially saddled with the responsibility of conducting elections in local government areas.
Section 124 which also was a consequential provision of the making of the Local Government a full third tier government, creates the office of the Auditor-General of the Local Government as well as the State Local Government Service Commission.
The Conference Committee of the Senate and House of Representatives in Section 174 and 211 separated the Office of the Attorney General of the Federation and Attorney General of the State from the Minister of Justice and Commissioner for Justice.
Going by the amendment, Section 225 empowered the Independent National Electoral Commission, INEC, to de-register political parties for non-fulfillment of certain conditions such as breach of registration requirements and failure to secure/win either a presidential, governorship, Local Government chairmanship or a seat in the National or State Assembly.
Section 7 in the amended Constitution strengthened the administration of Local Governments in Nigeria by providing for their funding, tenure, elections, and to clearly delineate their powers and responsibilities to ensure effective service delivery and insulate them from undue and counter-productive interference from state governments.
The Section 9 of the amendment enhanced the sovereignty of the citizens through their elected representatives by removing the need for presidential assent in constitution alteration exercise. It also replaced the word “Act” wherever it appeared with the word “Bill’.
The new amendment also enshrined the Right to Education and the Right to Health, as fundamental Rights in the Constitution, while Section 50A and 92A enshrined in the Constitution, the establishment of the National Assembly Service Commission and State House of Assembly Commission.
Section 59 authorized the President of the Senate to convene a joint meeting of the National Assembly to reconsider a money bill where the President withholds his assent and Section 67 made it mandatory for the President to attend a joint meeting of the National Assembly once a year to deliver a statement of the nation address.
Also, Section 81 of the amended Constitution engendered accountability and efficient service delivery; by providing for the funding of the Office of the Auditor-General of the Federation, Office of the Attorney-General of the federation, National Security Agencies, the Nigerian Police, the Revenue Mobilisation, Allocation and Fiscal Commission, directly from the Consolidated Revenue Fund of the Federation.
Also Section 82 and 122 of the amended Constitution reduced the period within which the President of the Governor of a state may authorize the withdrawal of moneys from the Consolidated Revenue Fund in the absence of an appropriation act from six months to three months.
According to the amendment, Section 89 and 129 empowered the National Assembly and the State Houses of Assembly respectively, to prescribe sanctions, civil or criminal or both for failure, refusal or neglect to obey summons issued by a legislative house or a Committee of any of the Houses.
In the amended Constitution, Section 121 also engendered accountability and efficient service delivery, by providing for the funding of the State Houses of Assembly, Auditor-General of the State and the Attorney-General of a State directly from the State Consolidated Revenue Fund.
Section 134 and 179 of the Constitution extended the time for conducting presidential or governorship re-run election to 21 days instead of the seven days for both presidential and governorship elections.
The National Assembly in Section 228 was conferred with the powers to make laws for the procedures, guidelines and qualifications for access to the ballot by political parties and independent candidates, while Section 241 provided that a court or tribunal shall not stay any proceedings on account of any interlocutory appeal.
In the amendment, Section 251 conferred exclusive jurisdiction on the Federal High Court for trial of electoral offences so as to expedite action on the matters.
The Conference Committee in Section 285 provided for time for determination of pre-election matters, establishment of local government election tribunals and time for determination of election petitions.
It provided that where a force majeure occurred, the period of the force majeure should not be counted in the computation of the 180 days for the purpose of determining election petitions.