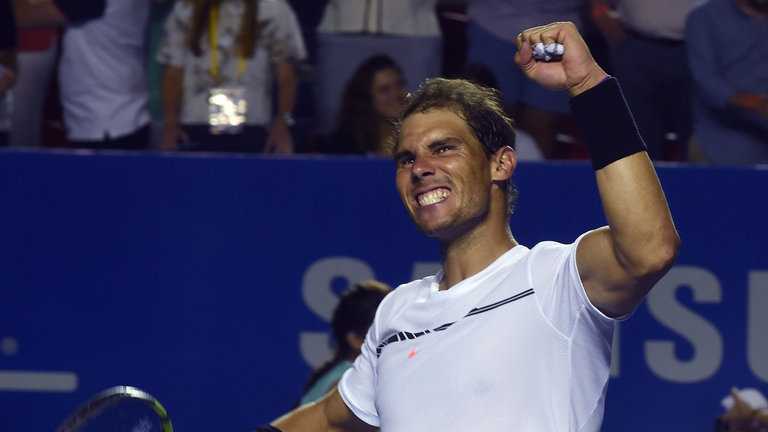 Two-time champion Rafael Nadal raced past third-seeded Marin Cilic 6-1 6-2 to reach the ATP Mexico Open final, where his perfect Acapulco record will be put to the test by Sam Querrey.

Querrey ousted Nick Kyrgios 3-6 6-1 7-5 to bring the sixth-seeded Australian’s giant-killing run to a halt a day after Kyrgios stunned world No 2 Novak Djokovic in straight sets.

Second-seeded Nadal, playing his first tournament since falling to Roger Federer in an epic five-set final at the Australian Open in January, has won all 14 matches he has played in Acapulco, where he lifted the trophy in 2005 and 2013.

Nadal roared through the opening set against Cilic, building a 5-0 lead before the former US Open champion, who advanced to the semi-finals on a walkover when scheduled opponent Steve Johnson withdrew, showed signs of life with a service hold for 5-1.

Croatia’s Cilic seized a 0-40 lead on Nadal in the next game, but the Spaniard saved four break points to hold for the opening set.

After receiving treatment on his right ankle, Cilic promptly dropped his serve to open the second set, and while he mustered break chances in each of Nadal’s first three service games of the second set, he could not convert.

Nadal, firing on all cylinders from the baseline, muscled two winners past Cilic as he broke again for a 5-2 lead and served it out with one last forehand winner.

“I have to be playing well to win like this against a player like Marin, so I’m pleased with the performance,” said Nadal, who withdrew from February’s tournament in Rotterdam after doctors told him he needed some rest after his run to the final in Melbourne.

“I’m happy with my focus in important moments, saving break points with good shots,” Nadal said. “I enjoyed the atmosphere here, so it’s great for me to be in the final.”

Querrey and Kyrgios were neck and neck in the third set when the American produced the first break of the set in the final game to seize the victory.

Querrey had saved the only break point he faced in the set with a 135 mile-per-hour serve in the fifth game.

Kyrgios, 21, had appeared on his way when he closed out the first set by winning four straight games.

But after leading 40-15 in the opening game of the second set he was broken, and suddenly seemed at sea and Querrey took the set in just 23 minutes as Kyrgios’ mistakes multiplied.

A medical timeout for courtside treatment on his right elbow seemed to help, and Kyrgios did not face a break point in the third until the final game. Then a backhand wide from the Australian suddenly gave Querrey two match points, and he belted a forehand winner on the first.

The victory continued a strong week for Querrey, who beat David Goffin and fourth-seeded defending champion Dominic Thiem en route to the semis.

“Sam is playing great, beating Goffin and Thiem,” said Nadal, who has won all four of his prior meetings with Querrey. “He’ll be coming into the match with a lot of confidence,”

A victory would give the Spaniard his first hard court title since Qatar in 2014.