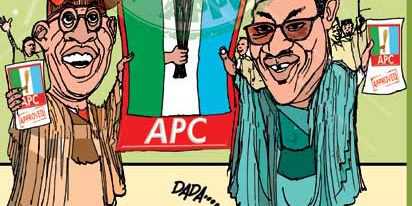 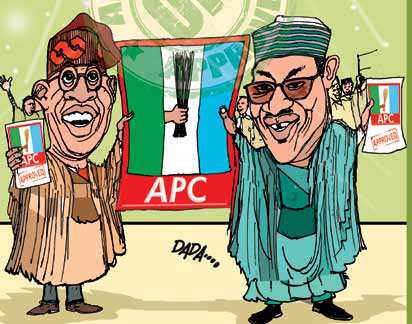 There were very strong indications at the weekend that the Peoples Democratic Party, PDP, governors who defected to the All Progressive Congress, APC, are ready to fully engage leaders of their new party, former military head of state, General Muhammadu Buhari, and former Lagos State governor, Bola Ahmed Tinubu, over the growing suggestion that both men are plotting to contest as presidential and vice presidential candidates in the 2015  elections, Sunday Vanguard can reveal.

In addition, information pieced together in the Federal Capital Territory, FCT, Abuja, and Lagos, over the weekend by Sunday Vanguard suggests that the disquiet in the APC over who flies its banner in the 2015

presidential race may not be a mere rumour after all.
The plot to ensure that Buhari and Tinubu both emerge is  thickening.

By the same token, opposition to the scheme heightened at the weekend based on contacts with some  APC  governors.

The other leg of the twist to the emerging katakata in APC is the position of former President Olusegun Obasanjo who is said to favour the emergence of Kano State governor, Rabiu Musa Kwankwaso, as the party’s presidential candidate.

Yet, there is the downside of how to convince a few Christian leaders of the APC who are still bemused by the possibility of a Muslim/Muslim presidential ticket.
However, Sunday Vanguard was made to understand that the whole idea of a Muslim/Muslim ticket is being promoted by the Presidency in order to sow discord in the ranks of the opposition.

Governors Kick
Dependable sources said: “the seed for the emergence of a Muslim/Muslim ticket was sown when the two major promoters of the merger which became the APC (Buhari and Tinubu) signified their intention to run.

“One of the sources, a northern governor told Sunday Vanguard in Abuja, last week: But the realization that there might be a very serious challenge against the candidacy of Buhari created the ground for the proposition of a consensus arrangement”.
That was not all.

Indeed, the consensus arrangement is expected to throw up Buhari as the presidential candidate while Tinubu would be his running mate.

“The electoral calculation has already been concluded and the party leaders are upbeat that they would defeat President Goodluck Jonathan with what they have seen on ground regarding their SWOT (Strength, Weaknesses, Opportunities and Threats) analysis – this is principally based on the perceived numerical strength of Muslims in the North and South West geo-political zone.

“Let me tell you, to convince them otherwise would be difficult and they believe they can pull it off, especially with the perceived lack luster disposition of President Jonathan”, another leader of the party from the South-west said.

It was gathered that no fewer that three APC governors  are angling to emerge as either  the presidential candidate or running mate for the 2015 election.

Information made available at the weekend suggested that the state governors are in a better position to mobilize supporters at the national convention of the party.

With their numerical advantage, the state governors are mobilising to ensure that they are not made “to appear like stooges”, a source said.

Interestingly, it was learnt that  former President Obasanjo has not hidden his preference for the emergence of  Kwankwaso as presidential candidate of the party.
“He has made it known to a few of his associates”, a source said.

“All these stemmed from the belief at inception that the creation of the APC would pose a very strong, balanced opposition to the PDP and its handling of the nation’s affairs; but it appears that the hopes are being dashed, except, of course, this nonsense is not true”.

Christian Leaders of APC
Apart from the state governors, some  Christian leaders in APC are also frowning at  the purported APC Muslim/Muslim presidential ticket  and “wish that it turns out to be mere rumour”, a former minister said.
In fact, the likes of “Chief Audu Ogbeh, Second Republic Minister of Communication and former National Chairman of PDP, as well as Sam Isa-Ndaiah, publisher of Leadership newspapers, have vowed to resist any such imposition if true and are ready to fight it to the end”.

However, just as Sunday Vanguard was about to go to press, an APC leader, who did not want to be mentioned. disclosed that “all these misinformation about a Muslim/Muslim ticket is the handiwork of the Presidency”.

“He went on: People in the Presidency have seen how potent an opposition the APC would be; so the only way they can attempt – and I use the word well (attempt) – to try to dampen the enthusiasm of our supporters is by playing the religious  card.

“It is President Jonathan who is using the church to promote politics.  It is because a section of Nigerians has posed questions, critical questions at that, to the seeming incongruity between Nigeria’s multi-religious status and the President’s public display of faith, that is why the Presidency is now selling this dummy to Nigerians about the APC presenting a Muslim/Muslim ticket”.