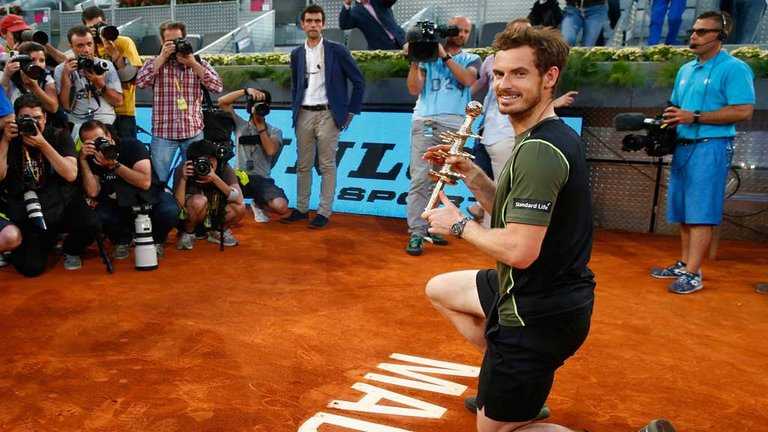 World No 1 Andy Murray will open his Madrid Masters campaign against either world No 29 Guillermo Garcia-Lopez or Romanian Marius Copil.

Murray could then face flashy 13th seed Lucas Pouille, or a potential reunion against the man who knocked him out of the Australian Open earlier this year, Mischa Zverev, should the German overcome Richard Gasquet.

There could then be a quarter-final showdown for the top seed and last year’s runner-up with eighth seed Dominic Thiem in a repeat of their Barcelona Open semi-final which the young Austrian won in thrilling fashion, or Bulgarian 12th seed Grigor Dimitrov.

Stan Wawrinka, Alexander Zverev or Marin Cilic could lie in wait for the Scot in the last four before a potential showdown against Rafael Nadal or Novak Djokovic in the final.

Favourite Nadal will be back in action fresh from winning back-to-back clay court titles in Monte Carlo and Barcelona.

But the Spaniard, who is aiming to win a fifth title in the Spanish capital, is seeded to meet Australian Nick Kyrgios in the third round, which could be a blockbuster of a clash.

But before that, third-seed Nadal could have a tricky opening match against the winner of Portugal’s Joao Sousa and Italian Fabio Fognini.

Djokovic begins his title defence against Tommy Robredo or Nicolas Almagro before a potential third-round match with 15th-seed Gael Monfils and quarter-final battle with sixth-seed Kei Nishikori, who was forced to pull out of Barcelona with a right wrist injury.

For those on the move, we will have Andy Murray’s matches at the Madrid Masters covered via our website skysports.com/tennis, our app for mobile devices and iPad, or follow our Twitter account @skysportstennis for news, reports, live blogs and expert analysis with updates on Sky Sports News HQ.