‘Murray right to be upset’ 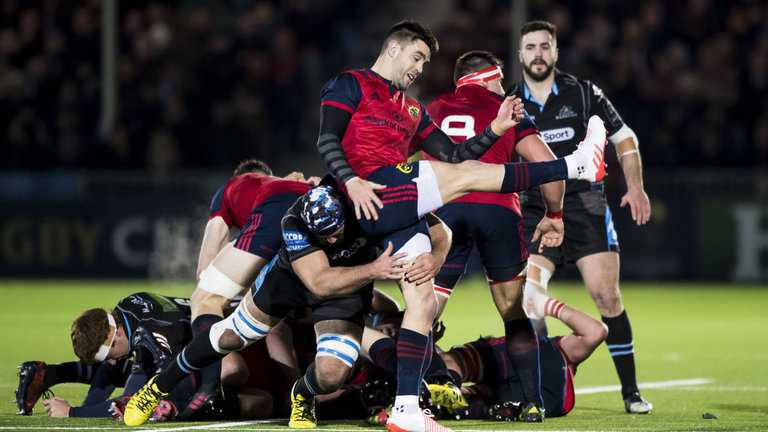 Joe Schmidt is not expecting to see a repeat of the tactics Glasgow Warriors used to try and shut down Conor Murray when Ireland play Scotland in the Six Nations.

Munster secured a tense 14-12 win in Scotstoun Stadium but Ireland scrum-half Murray was unhappy with the tactics Glasgow deployed to limit his box-kicking from the base of the breakdown.

Jonny Gray and Josh Strauss were two of the Glasgow forwards who were attempting to pressurise Murray into mistakes and both will be likely starters for Scotland when Ireland travel to Murrayfield on February 4.

Ireland head coach Schmidt agrees with Murray’s assessment that Glasgow’s tactics were dangerous and feels the 27-year-old was fortunate to escape serious injury.

“What happened in that game is probably done and dusted now,” Schmidt said.

“It was fairly public that there was dissatisfaction and I totally understand Conor being disappointed with how it happened. You can’t charge a ball down from the blindside, you have got to go through the standing leg and the potential for injury there is clearly evident.

“You only have to see how Conor just managed to lift his foot in that first 25 seconds, otherwise if his foot is anchored he’s going to blow his knee out, potential ACL (anterior cruciate ligament), MCL (medial), the whole shebang.

“It is the past. It will be incredibly intense, incredibly combative but I certainly don’t anticipate anything like that happening.”

Murray had said after Glasgow match: “I don’t see any benefit in charging down someone’s standing leg. I only see it as a danger or as a potential to get injured.

“I don’t think it’s a good tactic. You could put another label on that type of tactic. I’m not blaming the players. I don’t know who told them to do it, but it’s dangerous.”

However Scotland head coach Vern Cotter is adamant there was no deliberate effort to target Murray and insists Glasgow’s players were operating within the laws of the game.

“There was a discussion afterwards and some of it went to the press,” he said. “I’ve talked to the coaches and the players and it was not a deliberate tactic to injure Conor Murray.

“He is a key member of the team, as any half-back or decision-maker is, so there was pressure applied on him at certain parts of the game.

“It was unfortunate what came out in the press. There will be pressure applied on players, but all done within the laws of the game.”