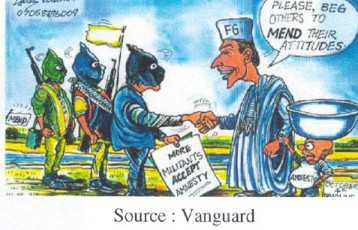 MEND have systematically become the Nigerian willing tool for the enslavement of its own people, and a willing tool as informants for the evil DSS, a movement which started out as a devoted emancipation movement has ended up a Nigerian toy soldiers, selling out the niger delta people’s hope and future.

MEND’s desperate low self-esteem actions alongside their Nigerian partners has furthermore thrown their reputation into the waste bin, their romance with the Nigerian government and abandoning the liberation call has made the Niger Delta people lose faith in them

For MEND to secretly dining with the department of state security service (DSS) and openly accusing our leader Nnamdi Kanu of renouncing Biafra is nothing but a shame on them, a sign of enslavement by the DSS, a sign of a lost flock of sheep looking for a bearing to follow.

But let it be known to the DSS, MEND, Buhari and Nigerians that the Indigenous People of Biafra (IPOB) under the leadership of Mazi Nnamdi Kanu “Ohamadike” is an ideology movement propelled by the power of God towards one goal and one goal only, which is the total liberation and restoration of the sovereignty of the entire Biafran Nation and CANNOT be compromised in any form or shape, or jeopardised by criminal elements like MEND seeking for favor and amnesty peanuts from Buhari.

Nnamdi Kanu is solid, resilient and resolute, A radical hardcore leader who swore an oath with his life to never give up the Biafra restoration struggle and is ready to give up his life for Biafra to be restored, He is NOT, will NOT and CANNOT renounce Biafra even at the expense of his life. Mazi Nnamdi Kanu is a true leader, a true freedom fighter who have the plight of his people at heart, he has led an example for us to follow and he is still leading by example, therefore, the Biafra restoration process is fully intact and sailing smoothly soon to reach its destination

The Nigerian government and security agency (DSS) have tried to break him in so many ways but they have failed woefully, they even went as far as promising him heaven on earth, they promised him Nigerian presidency, they promised him oil wells and billions of dollars but “ohamadike” the light of the world stood on his ground it is either “Biafra or Death” . sending a clear message to the murderous agents that he is ready to die for Biafra and will never renounce it.

Therefore, MEND and DSS under Buhari should look for another way to cover up their lies against Nnamdi Kanu, or cook up something else to tell Nigerians, rather than spreading lies from the pit of hell, MEND should either change their ways or end up like Adaka Boro , they have failed the Niger Delta people, and they have failed the early freedom fighters who came from the region, those who started the freedom struggle for the Niger delta people.

MEND have sold their soul for peanuts and cannot look for a way back as they have deeply sold everything they believed in for cheap peanuts from the Nigerian government, therefore, they are criminals waiting for stipends and amnesty paycheck from their paymasters, they have no reputation and no respect from the people anymore as they have totally lost track of their mission thereby looking for means of survival.

henceforth they are indeed regarded and referred to as “The Movement For Enslavement Of The Niger Delta” a willing tool for the DSS as informants and dirty workers. What a Shame!

By Nwa Biafra
For IPOB writers