More than 20 killed in bombing outside Somali hotel 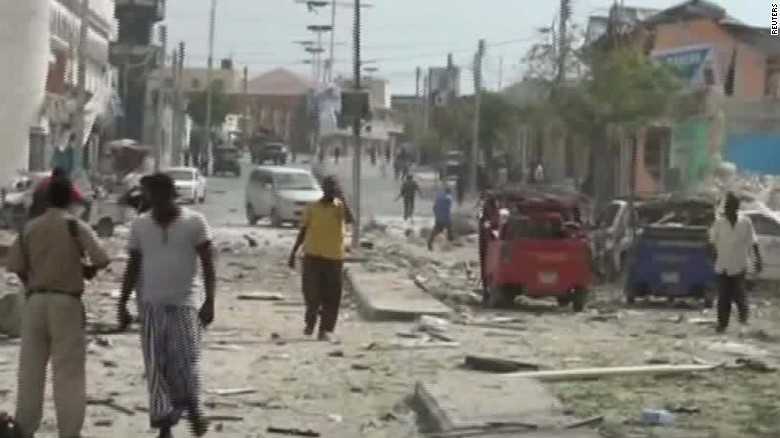 At least 50 people were injured in the attack, said Capt. Abukar Osman with the Somali Police Force. Among the injured are seven journalists, according to Hussein Ali, an official of Mogadishu’s ambulance services.

Attackers detonated a truck bomb outside the gates of the Dayah Hotel — which is near the country’s Parliament building and popular with lawmakers and government officials — before storming inside, Somali police Maj. Ahmed Ibrahim told CNN. A second truck exploded nearby 15 minutes later, Ibrahim said. Read More As of mid-evening, the gunfire had stopped and security forces were able to retake control of the hotel, Osman said. Ali Hajji, the head nurse at the nearby Hayad hospital, said the death toll is likely to rise. Al-Shabaab, an al Qaeda-linked terror group that seeks to turn the country into a fundamentalist Islamic state, has carried out repeated attacks against the government and military targets. One of the world’s poorest countries, Somalia descended into civil war after dictator Siad Barre’s ouster in 1991.

Why Al-Shabaab is a growing threat

Rival clan leaders and extremist groups such as Al-Shabaab took advantage of the power vacuum. The groups subsequently grew in size and strength. Al-Shabaab has seen its power wane in recent years, thanks in part to an African Union coalition dedicated to peacekeeping in the country. But Mogadishu is subject to attacks on a frequent basis. Most recently, a car bomb killed 20 people in December.