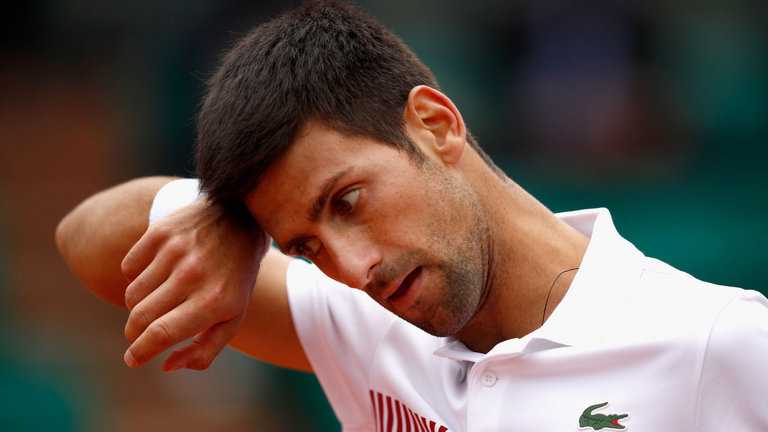 After defending champion Novak Djokovic collapsed to a meek straight-sets loss to Dominic Thiem at Roland Garros on Wednesday, Mark Petchey believes the Serb has “more soul-searching” to do.

Defeat also meant that just 12 months after holding all four Grand Slam titles, the 30-year-old was left fighting to prove he is still a relevant force in the sport.

Wednesday’s loss was just the ninth time that the Serb had suffered a 6-0 ‘bagel’ set and first at a major since facing France’s Gael Monfils at the US Open in 2005 when he was still a teenager, while the defeat will see him slip out of the world’s top two for the first time in six years.

Djokovic, who had brought in Andre Agassi as coach in an effort to boost his flagging career, hinted he may step back from the sport to regroup even with Wimbledon fast approaching.

Petchey feels there “have been a couple of false dawns” in recent months and admits there is a way to go before Djokovic returns to his best.

He said: “It’s really hard to put your finger on it. You think he’s back to somewhere near his best and it seems like he’s playing well and then, if we’re being honest the appetite for the fight just wasn’t there against Thiem, which is so unlike Novak.

“Clearly there’s still more soul-searching to do and a way to go in terms of getting himself back with the same hunger and desire in the competitive environment.

“The margins between winning and losing are so wafer thin at this level that if you don’t have this unconditional burning intensity inside of you, because winning is more important than anything else, then you don’t tend to turn the matches around. That would be the thing missing from him.

“A lot of the times – even when he was dominating – he didn’t necessarily play the best tennis but he found a way to win and recently that just hasn’t been the case.”

And Petchey says Djokovic “is too good not to return to his best” after suffering his first straight-sets loss at a major in four years.

“It’s a bit like for how many years before Peter Sampras won his last US Open in 2002 that he was done and dusted and then you talk about Roger Federer not winning another Slam and he’ll never get to 18 then he goes and does it. Normal rules don’t apply to these great players and Novak is a great player – he’s one of the best of all time.

“At some stage, you have to believe it will click again. He’s too young, he’s got too much of his career ahead of him for his form not to click and make it happen.

“At the end of the day, only he can answer the question whether or not he has the hunger and desire to go to places which very few players are capable of going in terms of the sacrifice. I think what it does show is how difficult that is to maintain over such a long duration of time.”