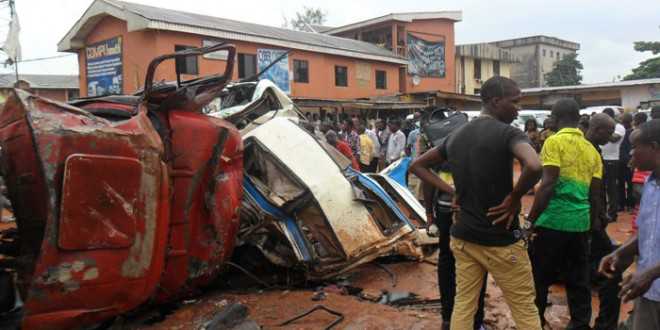 More misery were visited upon the people of Anambra on a day can only be describes as black Friday in Awka, A trailer rammed into three vehicles, killing about 28 persons instantly and injuring many others. Eye witnesses said the brake of the trailer carrying diesel with registration number: Abia AE729-UMA from Enugu end of the expressway along Enugu/Onitsha road failed and the driver lost control of the vehicle.

The incident happened at about 4 pm on Friday at the Nnamdi Azikiwe University junction in Awka. Three L-300 Mitsubishi buses were involved as onlookers wept  as men of the Federal Road  Safety Commission (FRSC), police men, Army men, NCSDC members battled to take the injured to different hospitals.

The Nation was told by an eye witness that when the trailer lost control, it rammed into one of the L-300 buses in transit and another one loading for Onitsha and killed all the passengers. Those also involved in the accidents were mainly people selling different items along the park and some Okada riders.

Some of them refused to talk to reporters, adding that they were unable to give correct account of what actually happened. Students and on lookers were seen crying their hearts out when visited the scene of the accident, while vehicles heading to Onitsha were held up for hours along the express way.

Reported by The Nation